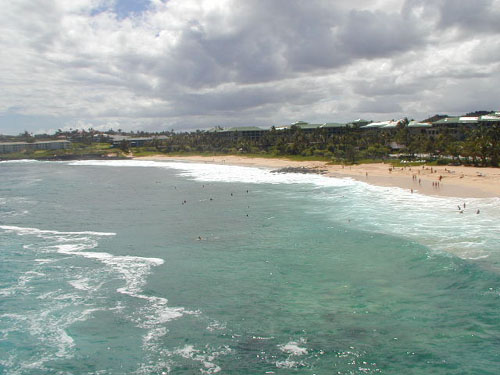 Shipwreck Beach, also known as Keoniloa Beach. The first name was given to this strip of sand due to an old shipwreck found there, which no longer exists. Swimming at this beach is never a good idea because the currents and the surf are really strong.

However, Shipwreck Beach is a favorite among surfers, boogie boarders, windsurfers, and body surfers at the eastern end where the waves are good for these activities. A green flag means the water is safe, although it’s a joke that a green flag has never been put up despite the safe conditions that do occur from time to time.

If you like taking risks, or having a lot of fun, then jump off the Makawehi Point. It’s a cliff that is fun to jump off of into the ocean below although it might not be the best idea and accidents can happen. If you have seen the movie Six Days/Seven Nights then you saw the stunt doubles for Ann Heche an Harrison Ford jumping off this cliff.