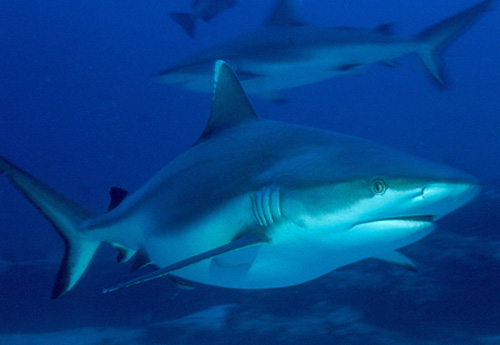 Mankind has always had a strong fascination for sharks. We respect their power, speed and dominance of the oceans.

Sharks may be one of the most fascinating and feared animals of the deep, but also one that has several of its species on the endangered list.

With this in mind the Four Seasons Maldives Collection has crafted a snorkeling excursion that will not only get guests’ adrenaline pumping, but help educate each traveler about these animals and their positive impact on the ecosystem.

Four Seasons Resort Maldives at Kuda Huraa brings its hotel guests up close and personal with one of the most valuable and vulnerable fish in the sea – sharks!

Shark Safari Snorkels was launched in late 2010 and provides adventure seekers and marine life lovers a chance to get up close and personal with the intriguing animal.

First, program participants take a short 15-minute speedboat trip from Four Seasons Resort Maldives at Kuda Huraa and land on the island of Bandos, where the surrounding waters are a playground for blacktip reef sharks.

Each snorkeler is escorted by one of the resort’s marine biologists, and then plunge into the waters to observe these incredible sharks in their own natural habit.

Each year, a stunning 100 million sharks are killed worldwide! Experts fear if current hunting rates continue, sharks could well be extinct within a few decades.

A big concern is if sharks are eliminated from our oceans, it could lead to an imbalance of other animals, resulting in catastrophic implications for the whole marine food chain.

Kuda Huraa’s Shark Safari Snorkel departs from the main jetty every Monday and Friday at 2:30 pm, followed by an educational talk on the ecological importance of sharks, conducted by the Resort’s marine biologists at 6:00 pm in the library.

Each trip is limited to a maximum of 12 guests.