If you love great rock and roll music and having fun in a tropical paradise, then Atlantis, Paradise Island resort – The Bahamas is the perfect choice.

Atlantis, Paradise Island is offering the ultimate fantasy in Paradise for would-be rock-star’s! Located in The Bahamas, Atlantis will be hosting a Rock and Roll Fantasy Camp over President’s Day Weekend, February 17-20, 2011.

You can have the once-in-a-lifetime opportunity to meet rock legends Tommy Lee (solo artist and founding member of the glam metal band Mötley Crüe), Ace Frehley (original member of the rock band Kiss) and Lita Ford (formerly the lead guitarist/singer of The Runaways) as your camp counselors.

The Rock ‘n’ Roll Fantasy Camp (RRFC) was formed in 1997 and has made the fantasies of novice, expert and dabbling music fans come to life on hundreds of stages all over the world. 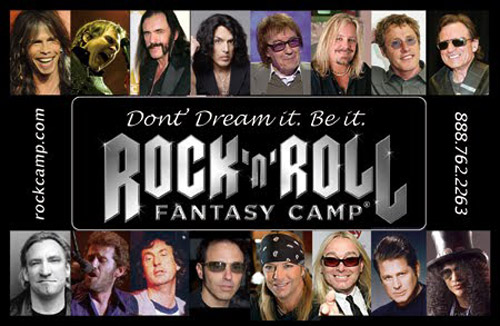 Participants of The Rock ‘n’ Roll Fantasy Camp are given the opportunity to write and record an original song, practice and jam with rock star band mates and learn the ins and outs of the music business with their very own exclusive all access VIP backstage pass.

This is a terrific experience, as campers will write and record original music, participate in jam sessions and rehearsals and cap off the weekend with a finale concert where the rock-legends will perform LIVE on stage with each camper’s band.

Next year’s Rock ‘n’ Roll Fantasy Camp will be held at the luxury Atlantis, Paradise Island in the Bahamas. Atlantis is an ocean-themed destination and features a variety of accommodations, all built around a 141-acre waterscape comprised of over 20 million gallons of fresh and saltwater lagoons, pools and habitats.

Priced at $4999/person, music lovers won’t want to miss out on unleashing their inner-rock star, alongside legends and in paradise, so book now as availability is limited. Rates start at $249 per night not including the cost of the Rock and Roll Fantasy Camp

For all the details of the Rock and Roll Fantasy Camp in Atlantis – Paradise Island, please visit: Rockcamp.com