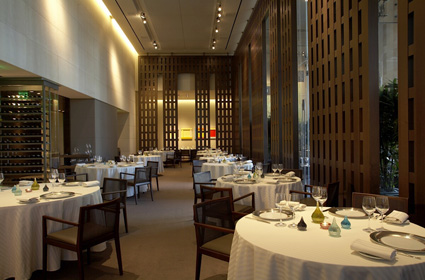 We tug open the temple like doors to Restaurant Guy Savoy and find the chef’s son, Franck Savoy, waiting on the other side with an enthusiastic greeting.

Like most big-name toques with Vegas restaurants, Guy Savoy visits only a few times a year, but his son moved here to oversee the restaurant.

The dining room of Restaurant Guy Savoy is minimalist luxe, almost like a gallery, with modern art and tables spaced for privacy but not isolation. It provides a rich juxtaposition to the food, which is a lush amalgam of consummate French techniques with contemporary flourishes.

Artichoke and black truffle soup, a Guy Savoy classic, satisfies as much from its heady aroma as its surprisingly delicate flavor, given the assertive nature of the ingredients. Crispy sea bass is also rapturously fragrant: Vanilla and ginger envelop the fish in a tango of sweet scents.

Accompaniments prove nearly as extraordinary as the dishes. Our server takes pains to explain the characteristics of each option on the champagne cart.

Types of breads are matched to featured seafood and meats: lemon confit bread for the sea bass; a chestnut variation for a course featuring foie gras with glazed chestnuts; bacon for poussin with fingerling potatoes and chanterelle mushrooms.

I dined at Guy Savoy the night before Joël Robuchon, and honestly wondered how the latter could trump the former. It did, but only by a nose. In my version of the Michelin rankings, based on one meal, Guy Savoy hovers within close reach of the coveted three-star rating.

A confession (and a consideration when you’re counting your winnings): Both meals at Joël Robuchon and Guy Savoy reached into four digits. Were both worth it? For sworn food lovers, yes. If you’re feeling flush but not quite that gilded, consider the next two restaurants.