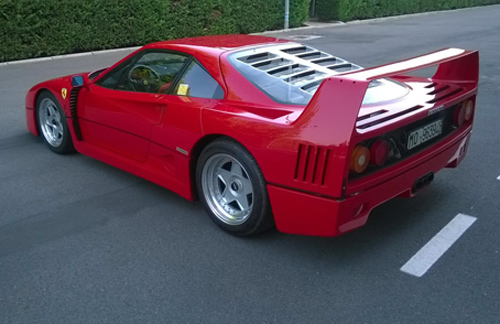 Many car enthusiasts consider the iconic Ferrari F40 as the greatest supercar ever built. But for whatever reason, the Ferrari F40 has not achieved the same fame as other Ferrari’s during public auctions.

A new record was just set for a gorgeous 1992 Ferrari F40 supercar. The staggering price for the winning auction bid was $1.2 million or €1.12 million. The Ferrari F40 was the last car sold by Ferrari founder – Enzo Ferrari.

The auction was held in Nürburgring, Germany – which is a popular motorsports complex near the German town of Nürburg. The auction was sponsored by Coys and they state the winning bid was a record breaker for a Ferrari F40.

Recently, prices for the F40 have risen rapidly. Not too long away, you could have picked up one on eBay Motors for under $600,000 using the “Buy It Now” option. Looks like that bargain price will now be a thing of the past and car lovers of this classic, 1992 Ferari F40 supercar will have to depart with a lot for money.

The Ferrari was first sold in 1987 and records show only 1,315 were manufactured. The F40 was built for just several years. But when it was available, it was definitely the fastest and most powerful car form Italian carmaker Ferrari. It was also quite pricey and also the most expensive, Ferari road car.

Historians will note that the Ferrari F40 was launched in 1987 to honor 40th anniversary of Ferrari. Great cars always stand the test of time.

Is a 1992 Ferrari F40 supercar on your radar to buy? The Life of Luxury works with many specialty and vintage car dealers and we can help locate that perfect car to add to your collection or for your driving pleasure. Read our luxury blog for more luxury car stories.