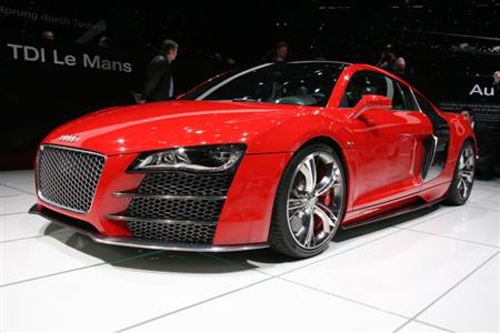 The Audi R8 V12 TDI Le Mans is apparently the first 12-cylinder diesel engine in a high-performance road going sports car. So with a 6.0-liter diesel under the hood, this R8 concept car will generate around 500 HP and 737.56 lb-ft of torque.

Audi is presenting a revolution in the top class – the first 12-cylinder diesel engine in a high-performance road going sports car. The V12 TDI with a displacement of six liters powers a concept car based on the Audi R8. This unit generates a huge 500 hp and 1,000 Newton-meters (737.56 lb-ft) of torque.

Audi is writing a new chapter in diesel technology with this power unit. Equipped with the expertise that Audi has built up through its motor sport activities, the R8 TDI Le Mans in Brilliant Red embodies superb road handling, pioneering technology and fascinating design.

The V12 TDI is closely related to the engine in the Audi R10, the two-time Le Mans winner – so it catapults the Audi R8 into super car terrain concerning performance too. It sprints from zero to 100 km/h (62.14 mph) in just 4.2 seconds and its top speed is well over 300 km/h (186.41 mph). The peak torque, reached at only 1,750 rpm, paves the way for effortless acceleration that is unrivaled even at this level.

For all the subtle smoothness that typifies this design principle, the twelve-cylinder unit is full-bodied and equipped with energetic overtones that make no secret of its performance potential.

Thanks to their high performance and pulling power, all Audi TDI engines are ultra-dynamic sources of power. The brand has often enough demonstrated its sporty character in its production cars, especially the six- and eight-cylinder 3.0 TDI and 4.2 TDI.  Full article