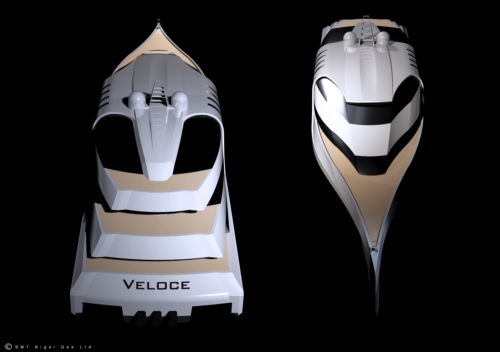 Christmas is nearing. What do you get that rich millionaire that has it all? How about a super yacht?
Now here’s one sure to make the shopping lists of the world’s richest marine enthusiasts.

Developed for high-speed applications, the patented Pentamaran hull form is a derivative of the stabilized monohull concept featuring a long slender central hull, hydrodynamically optimized without the constraints of needing to be stable as stability is provided by two pairs of outriggers or ‘sponsons’.

Project Veloce is truly an innovative application of technology in the large yacht market and is based on a 130m platform capable of over 40 knots. The beam of 30m offers significantly more internal area than on an equivalently sized monohull leading to exceptional internal spaces with true flexibility in configuration of the layout.

Conventional stabilized monohulls typically require relatively deeply immersed and long sponsons to meet damaged stability requirements and these can incur significant resistance penalties. The Pentamaran overcomes this by having two pairs of sponsons; a very short and shallow pair aft and a forward pair clear of the static water surface.

These forward sponsons only become immersed as the vessel heels, consequently stability characteristics are maintained with no resistance penalty. The Pentamaran offers a wide bodied and stable platform with outstanding seakeeping characteristics whilst retaining minimum speed loss in higher sea states.

BMT has undertaken some US$5 million worth of testing on numerous Pentamaran designs and the technology is now fully mature. Further development of the Project Véloce design is currently underway. Source: Gizmag