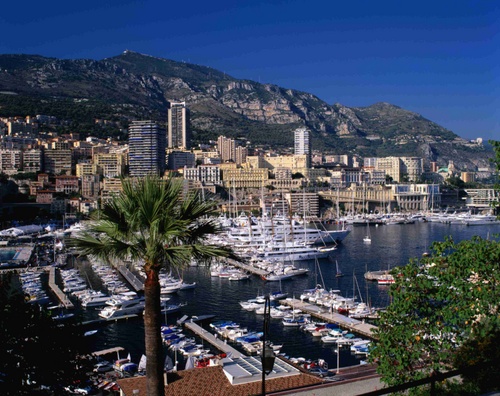 Port de Monaco is a must see, breathtaking location. There is only one way to enter Monaco without having to travel through France. Port Hercule, as it’s officially called, after the powerful Greek hero Hercules. It is also, many residents will tell you, the only way to truly enter the Principality in style. Style, of course, being the operative word, as it is throughout every square metre of this marble-lined paradise.

As I drew closer and closer to Monaco, its terracotta-coloured apartments and striking cliffs getting nearer, fellow yacht-dwellers sped past, sunning themselves atop their floating mansions. I couldn’t help but feel sorry for the crowd that had arrived on a package cruise liner, which had to dock right at the edge of the port like a child at his first day of school.

As I entered the port, there was an air of vibrancy, albeit a modest one, for the people who frequent these parts do not like to be scrutinised. You can rent a Segway at the information office, but it’s much more elegant to walk around with expensive shoes on. The casino is just up a rather hilly road, but for style purposes, few of the jet set would dare walk it; one of Monaco’s many luxury chauffeur services is in order.

The range of yachts is endless; dreamers and yacht fans need not necessarily wait for the annual yacht show when such a vast array of fibreglass opulence lines the port like the icing on a wedding cake. All of the major yacht builders have offices in the vicinity. Wally, who have been inspirational to the industry in recent years, is completely based here. One that I cannot peel my eye away from is “W2”, or Wedge Too, the De Vries Feadship that sits proudly in a dominating position of the harbour. This Phillipe Starck-designed beauty is a true work of art, and very easy to spot, with its old-style curves and immeasurably beautiful use of fine wood. However it has to be said that it is only one mere yacht amongst a sea of Sunseeker, Princess and every other marque in the yachtbuilders’ directory which can be found in the Port.

Along Boulevard Albert 1, which wraps around the harbour, lie boutiques, upmarket souvenir shops and a large swimming pool, which is surely too public for the A-list. I was rather surprised to find a 24-hour supermarket in the midst of it all; perhaps they get away with it by cleverly naming it “Casino”. Along the plaza which lines the port, a number of cosy cafes can be found. This is not restaurant territory; La Condamine, a vibrant commercial district, is only two minutes away.
In an attempt to validate the theory that Port Hercule is ‘simply the best’, I took a five-minute stroll to the Fontvieille district, a community of new-builds in an area reclaimed from the sea. It is also home to Monaco’s second, much smaller harbour, Port de Fontvieille. Just as I suspected, there was nothing to be relatively impressed about. Port Hercule had truly spoiled me, and here I was, turning my nose up at mere 40 foot models, like a spoilt child. Whilst this littler port would look immense anywhere else, the oozing of excess on show at the original Port de Monaco was simply unmatchable.

If your pockets are lined well enough to be the owner of an enormous yacht, you should be ashamed of yourself for not having it docked here. I was reliably told that one of music’s all-time legends and the vice-president of a Middle Eastern nation (both of whom I shall not name) were just two of the many superstars who shared my presence in the port. Yet I saw little evidence of stalkers or paparazzi; they must be well-disguised in the Principality.

As I left Monaco’s glistening Port Hercule, I couldn’t help but be left slightly bewildered over one thing- why they chose to give the port this name. After all, in Greek mythology, Hercules was only a mortal. Come to Monaco’s port, and you will encounter little else but immortality.

Article written by Peter Thompson, who personally traveled to this most famous port to discover its fabled stardom.