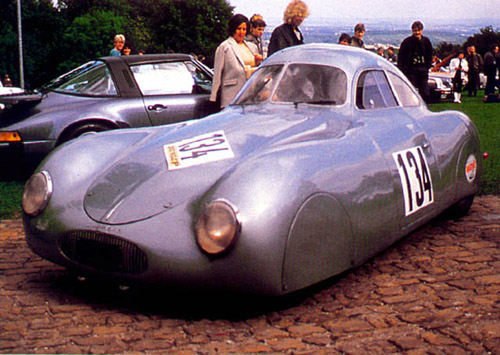 A parade of over 100 Porsches were seen cruising through the streets of Atlanta headed to their final destination – the Allure of the Automobile exhibit at the High Museum of Art.

Also spotted in the parade is the first 2010 GT3 RS in the United States.

The original Porsche Type 64 is one of the rarest automobiles anywhere in the world, Until now, Type 64 had never left Germany. But the Type 60 is in the U.S. to celebrate the 60th Anniversary of Porsche in North America.

Back in the late 30′s when it was first built, the Type 64 had reached a speed of up to 81 mph, which was quite fast for its time.

Attendees of the Allure of the Automobile exhibit can also view a 1953 Porsche 550 Le Mans/Le Carrera Panamericana coupe, which is on loan from the Collier Collection in Florida.

Additional cars at the High Museum of Art, will be from Jaguar, Bugatti, Mercedes-Benz, Duesenberg, Pierce-Arrow, Cadillac, Tucker, Ferrari, Packard and many more.

The entire car collection will cover a a wide range of models from the 1930s up to the 1960s.

The cars will be on display at Atlanta’s High Museum of Art until June 20th 2010.