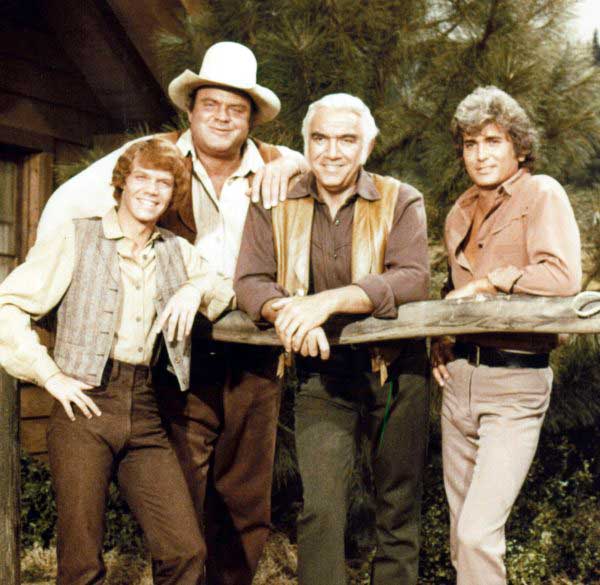 The Cartwright family was rough, tough and lived by the law of the land. Led by their stoic father, Ben and his three sons – Adam, Hoss and Little Joe made TV history and had millions of adoring TV fans. In 1959, the series was aired on Saturday evenings. Bonanza was one of the first series to be filmed and broadcast in color.

On September 27, 2004, the Ponderosa Ranch’s gates had closed for good, after the land was sold to Incline Village developer David Duffield. For fans of the television program, the following describes what one could see when the ranch was open to the public.

For fourteen seasons in the 1950s and 60s, fans watched the adventures of Pa, Adam, Hoss and Little Joe on the program Bonanza. The fictional Cartwright family lived on the Ponderosa Ranch at Lake Tahoe, and parts of Bonanza were filmed on its shores.

The famous opening scene of Bonanza was filmed on location at North Lake Tahoe near Incline Village, and Lake Tahoe was among the outdoor locations used to film the weekly episodes. The house, both interior and exterior, was located on a Hollywood sound stage.

Lake Tahoe contractor Bill Anderson worked with the film crews on location, cutting roads and building fake outbuildings, and in 1967, he approached the show’s producers and NBC with a proposal to build an exact replica of the house exterior in Hollywood, with a copy of the sound stage interior inside, creating a detailed replica of the fictional ranch house. Anderson’s Ponderosa opened in 1967 in Lake Tahoe.

The recreated Ponderosa became the centerpiece of a western-themed tourist attraction, a bonanza of a different type in scenic Lake Tahoe. 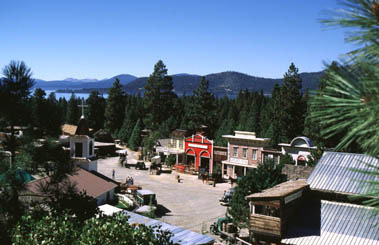 Visiting the Bonanza Set at the Ponderosa

Attractions included souvenir shops and vintage car exhibits and a Wild West show, but the Holy Grail for Bonanza fans was the ranch house.

Outside, many visitors found the house smaller than they remembered from watching Bonanza on a small television, but inside were all the familiar Bonanza settings: the stone fireplace, Pa’s desk, the dining table and the stairs. However, a short video revealed that those stairs didn’t go anywhere (the upstairs rooms for Bonanza were on a separate sound stage). Visitors could see hidden panels for lighting, and found that one side wall slid away for long shots inside the living room.

Perhaps the most interesting thing (and the most disturbing to idyllic childhood memories) was that Bonanza was created to sell a commercial product. Hours spent watching Bonanza, dreaming of the Wild West and swooning over Little Joe came about because RCA, NBC’s parent company, wanted to sell more color televisions!

After learning more about Bonanza on the Ponderosa house tour, a walk up to the photo platform gave a good view of the house and town.