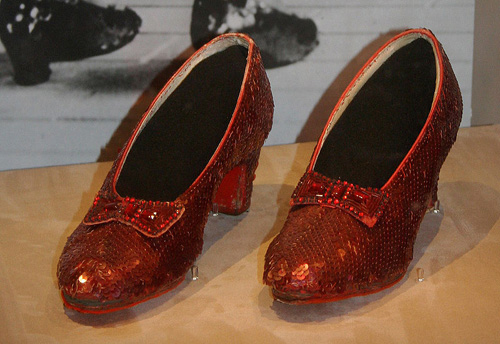 The Wizard of Oz is one of the most beloved Hollywood films ever made. But movie buffs were shocked almost ten years ago when the iconic ruby slippers worn by Judy Garland were stolen.

The famous ruby slippers were on display at the Judy Garland Museum, in Grand Rapids, Minnesota. Although there have been countless leads on who may have stolen the size 5 1/2 shoes, they have never been found.

Luckily, there are three other pairs in existence, including one pair at the Smithsonian Institution in Washington D.C. In addition, you will be able to see Dorothy’s ruby slippers at the The Academy of Motion Picture Arts and Sciences Museum once it’s finished being constructed. This museum will become the world’s leading movie museum and will be located in Los Angeles.

If you have any information regarding the theft of the ruby slippers from The Wizard of Oz, there is now a one million dollar reward. To collect from the anonymous benefactor, you must provide the exact location of the stolen slippers, plus the actual name of the thief’s name or names if more than one were involved.

When the ruby slippers were stolen in August of 2005, they were insured for $1 million. The executive director of the Judy Garland Museum is John Kelsch and he told the Associated Press he believes the shoes are now worth between two and three million dollars.

The Wizard of Oz has release in 1939 and once production finished shooting, the ruby slippers were stored in the MGM wardrobe department. The pair that was donated to the Smithsonian Museum, was found at MGM in 1970 and bought during an auction for just $15,000. What a bargain for such an amazing piece of movie history!

If anybody has information on the missing shoes, you can contact the Grand Rapids Minnesota Police Department. Their phone number is 218-326-3464. Solve the ten year old case, and you could be $1 million richer.

The Life of Luxury enjoys sharing interesting stories like the new $1 million reward solving the stolen ruby slippers case. Come back often to enjoy reading our luxury blog. We offer numerous luxury experiences and unforgettable access to VIP events around the world.

Photo: By dbking [CC BY 2.0 (http://creativecommons.org/licenses/by/2.0)], via Wikimedia Commons