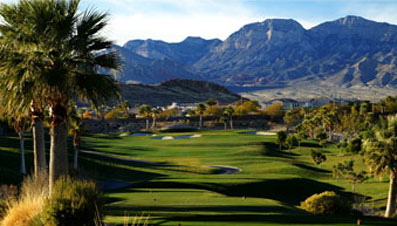 It’s no where near a beach but the Arroyo Course at Red Rock Country Club has plenty of sand. Lots of it.

The Arnold Palmer signature golf course has close to 100 bunkers, but even more importantly, some 40 acres that used to be irrigated turf have been returned to the desert – ergo more sand … and rocks and cacti.

The bunkers, though plentiful, are shallow and generally not difficult to play from, and the new desert landscaping shouldn’t come into play if you’re smart and moderately skilled.

Playing at 6,857 yards to a par-72 from the back tees, the Arroyo Course isn’t overly long and not particularly tight either.

Keeping the ball in play is fairly easy for most players. Couple that with superb conditioning, and the Arroyo Course, which is situated in the master-planned community of Summerlin, is enjoyable for all skill levels.

After a satisfying round in the desert sun, players can enjoy a country club feel in the Arroyo Grill, which features a full bar, appetizers, salads and entrees. The grill is also open for breakfast, and there are both men’s and women’s locker rooms to use before and after the round to give the daily-fee player the country club-for-a-day feel.  Full article