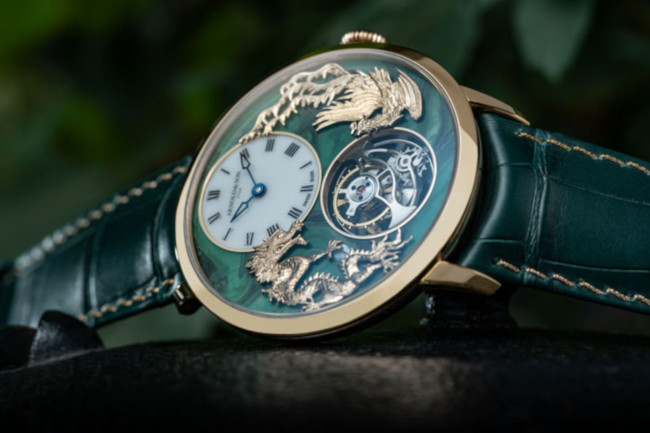 The Ultrathin Tourbillon Dragon & Phoenix merges ancient mythology with ancient minerals. Luxury watch brand Arnold & Son added new dimension to its thinnest tourbillon line. Each of the five versions are limited to just five pieces each, Plus, they present a different hardstone dial. In addition, the unique structure, color, and richness of these minerals serve as a dramatic backdrop for the two legendary creatures. Hence the dragon and phoenix. Each are beautifully depicted dancing around a prized pearl.

Arnold & Son are composed of expert Swiss artisans. They have professionally decorated the series of 25 pieces with iconic figures of Chinese mythology. They are found nestled below the off-centered dial. Since the 18th century, Arnold & Son has often employed this dial composition to accommodate its manufacture calibres. including the famed marine chronometers developed by John Arnold. As a result, the dial format allows ample room not only for the Maison’s mechanical movements but also for artistic expression.

Named after John Arnold, English watchmaker of the 18th century is widely renowned, for his ingenuity and work on marine chronometers. Therefore, Arnold & Son perpetuates its legacy today. They continue to explore contemporary ways to interpret traditional watch craftsmanship. The luxury watchmaker is based in La Chaux-de-Fonds, cradle of the Swiss watchmaking industry. Also, Arnold & Son develops its timepieces in-house including its complicated calibers.

Arnold & Son references the myth of the Dragon and the Phoenix, expressed in the highest horological art. Interesting to note, Chinese myth holds that these fantastic creatures were neighbors who decided to make a pearl together. One using its talons while the other using its teeth. The jewel became the extraordinary product of their equally impressive magic powers. Stolen by the mother of the Jade Emperor, the pearl fell down from the heavens and the creatures rushed to catch it in mid-air. As a result, this pearl of wisdom and fertility is the essence of the Ultrathin Tourbillon Dragon & Phoenix tale.

The two beasts are depicted by two expressive, precious, and finely worked miniature sculptures. They hug the dial on both sides. Complete with scales, feathers, spurs, teeth, beaks, and manes, they have been entirely crafted from solid rose gold and engraved by hand. In the dragon’s claws is the mythological pearl, here crafted in strong and lustrous mother-of-pearl. Despite their diminutive size, measuring only 2 cm long, these two creatures exhibit an extraordinary level of detail. Notice in the background, Arnold & Son introduces color, substance, and texture with five distinct hardstones. 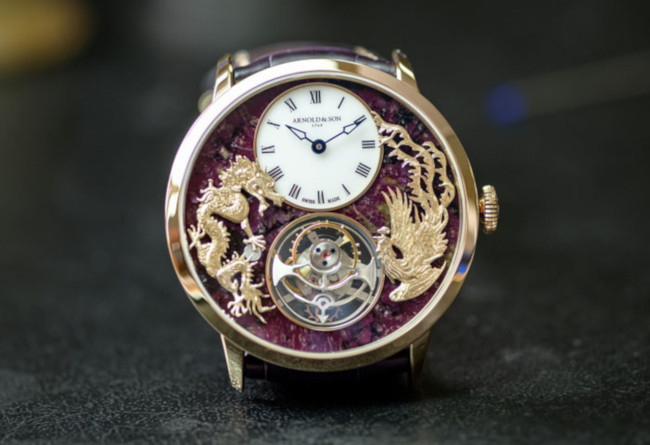 Each of the five Ultrathin Tourbillon Dragon & Phoenix models features a dial, made from a different hardstone. The five colored minerals employed (Bronzite, Eudialyte, Marcasite, Pietersite, and Verdite) were chosen for their evocative properties. In addition, they are richly textured, visually complex surfaces.

Each of these versions comes with a large-scaled alligator skin strap that coordinates with the dial. It is topstitched with 18-carat gold thread. Plus, the strap attaches to a 5N red gold case that measures 42 mm in diameter. Astonishingly, the thin profile incorporates the tourbillon calibre of the Ultrathin Tourbillon Dragon & Phoenix.

Each timepiece simultaneously offers accurate timekeeping. Featuring a refined skeletonized structure, mechanical nobility and symmetrical architecture. The symmetry of the pieces even extends to the domed sections. Hence, the skeletonized tourbillon bridge slightly protrudes from the dial. It is level with the off-centered dial, which is also domed.

Under each rare stone dial lies the A&S8200 calibre. Measuring 2.97 mm thick, it is one of the thinnest ever to be regulated by a tourbillon. The A&S8200 calibre was entirely developed, produced, decorated, assembled, adjusted, and finished within the walls of the brand’s manufacture in La Chaux-de-Fonds.

This calibre is based on a large barrel with an oscillation frequency of 3 Hz. Hence providing a 90-hour power reserve that is extremely rare for a tourbillon, especially given its thinness. In addition, the structure is refined further still by the skeletonized tourbillon bridge. Also notice the unique, hand engraving on the rear tourbillon bridge. Fascinating to see, the light passes through the Ultrathin Tourbillon Dragon & Phoenix. As a result, it illuminates the mythological scene and brings the mechanical lacework into the mineral landscape.

Make a gift for that special person in your life a memorable one. For a birthday, anniversary, graduation or job promotion, giving a luxury watch is an ideal gift. Plus, it will last a lifetime. The Life of Luxury can help you locate and purchase that perfect luxury watch

We hope you enjoyed reading about the Ultrathin Tourbillon Dragon & Phoenix luxury watches from Arnold & Son. Return to follow the latest product releases in the luxury watch industry.