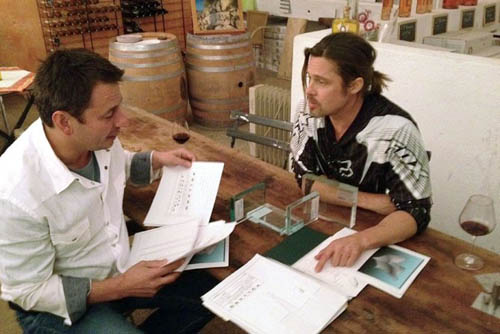 Brad Pitt has been cast in a new role…. not a movie role, but instead has turned his infatuation as a furniture designer into creating a high-end collection of furniture for a luxury design house.

Pitt has teamed up with furniture maker Frank Pollaro, whose New Jersey firm is noted for its impeccable reproductions of Art Deco furnishings. The official Pitt Pollaro site launched on November 11th at: http://www.pitt-pollaro.com

When Pollaro and Brad Pitt met to install a reproduction Ruhlmann desk the actor had custom-built a few years ago, a sketchbook filled with drawings of furniture designs was spotted by Pollaro. That was when they decided to make some of the stuff real. Brad thought that could be fun.

Pitt said “I’m drawn to furniture design as complete architecture on a minor scale. I am obsessively bent on quality, to an unhealthy degree.” Pit said Pollaro expresses the “same mad spirit of the craftsmen of yore, with their obsessive attention to detail.”

Scottish architect Charles Rennie Mackintosh’s Glasgow Rose had a big impact on the 48-year-old actor. Mackintosh’s collections were drawn with a continuous line and with the fluidity of a single line, whether it be geometric or circular. An uninterrupted line has great appeal to Pitt, He explains that there is a symbolic element that is tough to articulate. He states “There is something more grand at play, as if you could tell the story of one’s life with a single line — from birth to death, with all the bloody triumphs and perceived humiliating losses, even boredoms, along the way.”

According to Pollaro, Brad Pitt has thousands of ideas … to decide which ones to produce the two men frequently hold seven to ten hour meetings where they engage in discussions about design, materials, craftsmanship, classicism and modernization.

The dozen-piece collection, which will be unveiled by the Pollaro furniture house in New York between November 13 and 15, will include sophisticated Art Deco ocean liner beds, a dining table, a cocktail table, several side tables, a few club chairs, even a bathtub for two in Statuario Venato marble. Many of the designs feature single lines that can be geometric such as the 17 foot long wood dining table whose jagged base has dramatic zigzags at astonishing angles. Or a glass-top side table with a 24K gold spiraling metal base.

All of the initial designs will be made in numbered editions or limited production and will be signed by Pitt and Pollaro. Although specific prices are not discussed they are by and large at the high end of the custom-furnishings scale. A chair might sell for $45,000, but some pieces may be put into large-scale production using different materials, a molded plastic chair for instance, which might sell for a fraction of that.

When asked how he feels about being called a furniture designer, Pitt cautions “Let’s not get ahead of ourselves.”

Pollaro predicts, for his part, that this is just the beginning. “I think we’ll be doing this for a long time,” he says.