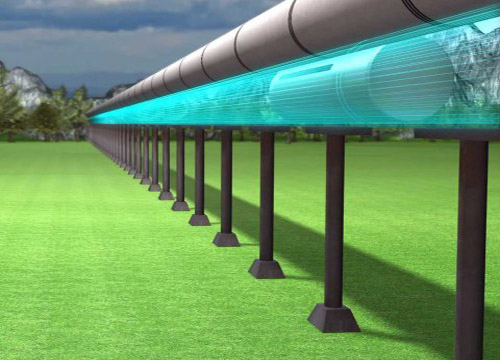 For those that make the long drive from San Francisco to Los Angeles would love to find a way to cut their travel time way down. Maybe there is hope on the way from Telsa and its Hyperloop technology.

Tesla CEO Elon Musk is the driving force behind both Tesla Motors and SpaceX. He now has a dream to develop high-speed system traveling that would allow passengers to travel at high speeds. This sounds like something from the old The Jetsons cartoon or even the speeder bikes seen in Star Wars.

The company leading the development is ET3 (Evacuated Tube Transport) and they are located in Longmont, Colorado. The have coined their exciting new technology project – the Evacuated Tube Transport. Travel time between and S.F and L.A. could be as little as 30 minutes! An L.A. to East Coast trip could theoretically be only an hour!!

Earlier projections consist of an automobile-sized capsule that could hold up to six-passengers. Traveling up to speeds of 4,000 miles per hour would make journeys across the U.S or even continents possible. What is amazing to comprehend is that the cost for the elevated tube system would be significantly less than today’s high-speed rail or building a freeway. Estimated costs for for a passenger to travel between New York and L.A. would be only $100.

The best way to describe the proposed technology is an elevated tube system that consists of a magnetic levitation system like what high-speed bullet trains use. These tubes can then be connected to create a futuristic superhighway all across the United States.

California is forging ahead with a $70 billion budget cost for their new high-speed rail project. Could Hyperloop from Evacuated Tube Transport make this huge project obsolete? Bets estimate today is a San Francisco to L.A. trip is done in three hours versus only 30 minutes.

The next big step is going from the drawing board of schematics to actually building a prototype. ET3 is currently working on a plan to build a 3-mile test run by the end of this year.