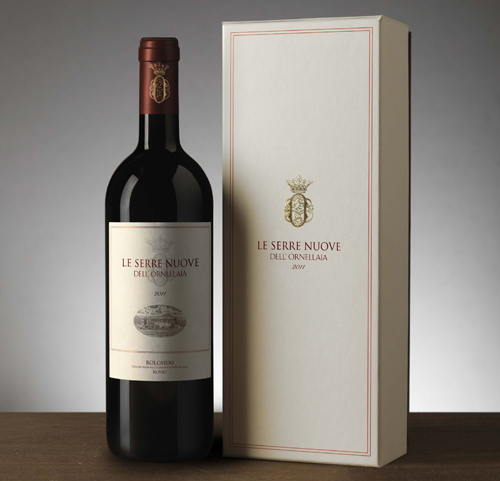 Well recognized as one of the top estates in Italy, Bolgheri is also one of the favorite spots to produce wine in the world.

The Second Vin of Ornellaia is expected to meet all of the high expectations for Bolgheri’s most spectacular vintage.

The Le Serre Nuove dell’Ornellaia 2011 wine’s vintage ideally reflects the growing year that produced it – 2011. That year, the rains arrived just at the desired moment, right after flowering and veraison, which encouraged excellent development of the clusters.

Michel Rolland is an International Winemaker Consultant and commented on the vintage 2011, “Bolgheri is today one of the most famous spot to produce wine in the world. Everybody remembers the fantastic 2001 vintage. Ten years after 2011 is as amazing as 2001 was. But we are working better, and 2011 seems to be more sophisticated.”

The Ornellaia Estate extends over 97 hectares along the beautiful Tuscan coast, nearby the medieval hamlet of Bolgheri and the world famous, cypress-lined avenue “Viale dei Cipressi.”

Ornellaia has earned extensive recognition is consistently ranked among the top estates by the Italian Wine Guides, including: Espresso, Gambero Rosso, Duemilavini AIS, Veronelli plus Luca Maroni. In 2001, the 1998 Ornellaia was declared Wine of the Year by Wine Spectator.

Axel Heinzis the Ornellaia’s Winemaker and Production Director and stated, “The palate immediately amazes continued Heinz, “for its ripeness and quality tannins, which are supple, densely-packed and already strikingly glossy.”

Ornellaia’s company philosophy considers the birth of the wines to be the truest expression of their terroir. All of the grapes for Ornellaia are carefully selected by hand, and picked in the estate’s vineyards in Bolgheri, located on the Tuscan coast in Italy.

If you are interested in purchasing the Le Serre Nuove dell’Ornellaia 2011 or any other hard to find fine wine, please contact The Life of Luxury.