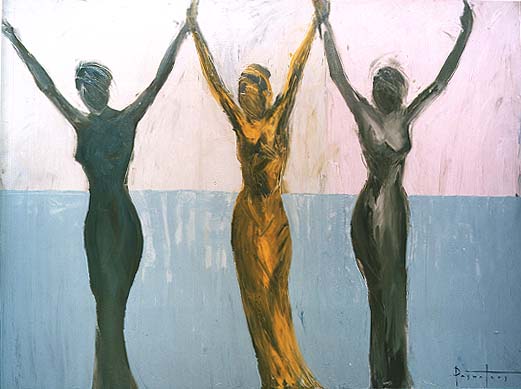 The program, launched by the couple and with National Gallery of Art, titled gives 50 works from the contemporary collection to an institution in each state.

Libby Lumpkin, executive director of the Las Vegas Art Museum, says the museum received a tentative list of works Thursday. The list includes pieces by such artists as Richard Tuttle and Larry Zox.

“We are very honored to have the confidence of the National Gallery of Art,” Lumpkin says. “I have been an admirer of the Vogels and their collection for many, many years. They are the quintessential example of how you can be a collector without having an enormous amount of money. They got to know the artists and the gallerists. They followed their instincts. And they had great instincts.”

The couple started collecting art in the 1960s. Herb Vogel was a postal clerk. Dorothy Vogel was a librarian. Their collection of 4,000 works includes mostly minimal and conceptual art by such artists as Sol Lewitt, Sylvia Plimack Mangold and Christo and Jeanne-Claude

The National Gallery of Art is working with the National Endowment for the Arts and the Institute of Museum and Library Services on the national gift program.

Lumpkin will attend a celebration for the program in November at the National Gallery of Art. The works are scheduled to arrive in December and the museum will hold an exhibit shortly after.  Article by: Kristen Peterson – Las Vegas Sun