A Luxury Razor for a Lifetime by Henry Tuke 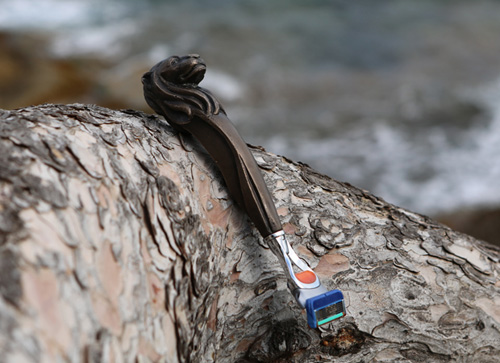 A razor is often a forgotten luxury but we all know what a bad one can do to our skin. A good quality razor is hard to find, but we wanted to offer one that could be one of the best out there.

Henry Tuke is a British luxury brand in London that specializes only in exceptional men’s gifts and accessories.

The luxury razors from Henry Tuke are ideal for men who feel that “good enough is simply not good enough.”

Each razor is hand sculpted and cast from solid silver or bronze. They can also be customized and made to bespoke sizing requirements.

A man’s face can be challenge for many razors. As a reference, the average man spends about 3,000 hour during his life just shaving. He can have approximately 15,000 to 20,000 course hairs growing out of his face. A razor can take a beating and one with a dull blade can cause skin problems and even bleeding.

So for descerning men around the world who desire more than your average razor, Henry Tuke may be your answer.

The line of Henry Tuke razors come available in various shapes ranging from lions and mermaids to nude ladies and silver birch twigs. The entire razor collection is compatible with either the Gillette Fusion blades or Mach III family of cartridges.

Tom Tuke-Hastings is founder of Henry Tuke and was quoted, “I believe we’ve produced a range of products that any man would be proud to use. After all, how many men can say that a naked woman shaves them every morning?”

All Henry Tuke products are made in Great Britain and their new line of razors would make that perfect Christmas gift for your husband, boyfriend, dad or or other family member or friend.

The mission of Henry Tuke to use only the finest materials and a strong desire to create beautiful things without cutting corners.

You can purchase the Henry Tuke razor with pricing starting from £300 for a “twig” razor cast from silver birch made in solid bronze.