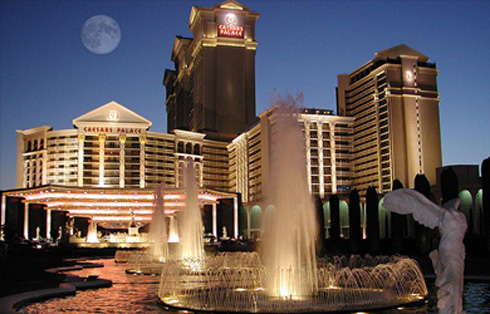 Jay Sarno owned a chain of “cabana” motels across the U.S. and looked at Las Vegas as his place for expansion.

Back in 1962, Jay Sarno used a $10.6 million loan from Teamsters Central States Pension Fund, to begin construction of an elegant Las Vegas resort. Caesars Palace was built on a 34-acre piece of property.

Initially, the Vegas resort was to be named the Cabana Palace. It next changed to the Desert Palace, then finally Caesars Palace.

Building the mighty hotel did have its share of construction problems. One notable one was when builders hit water during the building of a planned underground parking lot. Using coverts to divert the water, building eventually resumed but sometime later, the underground parking plan was abandoned.

Inside Caesars was a very large casino that seemed to go on forever. The casino offered a shallow oval-shaped dome hanging low over the gaming pit. Sarno felt this design created relaxation. The casino offered no windows and the ceiling was blacked-out. Away from the massive casino, a variety of retail shops, restaurants, lounges and corridors awaited the hotel’s patrons. Down one corridor was the impressive Circus Maximus, the resort’s main showroom.

There have been many memorable moments held at Caesars Palace. One that was legendary for years to come occurred on December 31, 1967. That was when Evel Knievel failed in his attempt to jump over the famous Caesars’ fountain in his motorcycle.

As the hotels expansion continued in 1973, Del Webb Corporation built a 16 story, 333 room high-rise tower that finished the following year. Then in 1979, a 22-story tower was completed.

To finish what his famous dad couldn’t, Robby Knievel, son of Evel Knievel, did make the jump over Caesars’ fountains on April 14, 1989.

Caesars palace has continued to grow and expand, adding more rooms, casino space, fine dining and luxury shopping.  A visit to the Caesars Palace Forum Shops is a must.