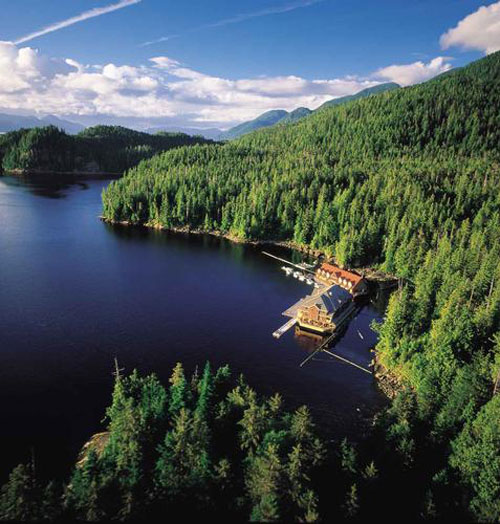 The luxury King Pacific Lodge is a magnificent 17-room floating, wilderness lodge that can be found in the heart of the mighty Great Bear Rainforest.

King Pacific Lodge, a Rosewood Resort, was proud to have received the award – North America’s Leading Green Hotel 2010 by the World Travel Awards.

King Pacific Lodge resides in the Great Bear Rainforest, which is the world’s largest remaining tract of temperate rainforest.

The recent award from the World Travel Awards, follows another prestigious award received by King Pacific Lodge. As part of the 2010 Readers’ Choice Awards, readers of Condé Nast Traveler’s magazine once again voted King Pacific Lodge the No. 1 resort in Canada for the third consecutive year.

President of King Pacific Lodge, Michael Uehara was quoted, “King Pacific Lodge has long been noted for its luxury and quality, but it is in equal measure our commitment to sustainability and conservation that has generated a loyal following for the lodge. We know that today’s travellers are looking for more authentic experiences and a deep connection to the destinations they visit. A visit to the lodge provides an opportunity to see a world they could easily have missed.”

For the upcoming 2011 travel season, King Pacific Lodge will be open from June 3rd to September 23rd. To learn more, visit: http://www.kingpacificlodge.com/