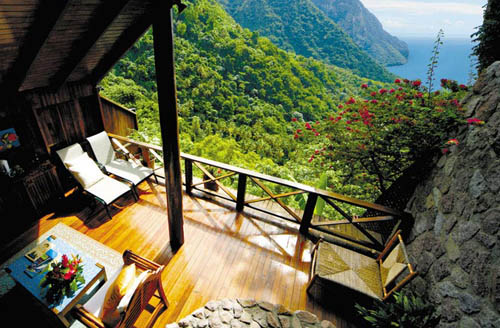 Known for its breathtaking, serene sceneries, St. Lucia is legendary a good reason.  The award winning Ladera Resort in St. Lucia takes luxury to a whole new level.  Its open-air architecture, luxury hospitality, and eco-friendly practices at 1,100 feet above the Caribbean Sea, is celebrating its 20th Anniversary by launching an exciting new offer that generously gives back to its guests.

Regarded as one of Caribbean’s most innovative West Indian cuisine, Dasheene also boasts unobstructed views of the sunset and the Piton Mountains, a famed UNESCO World Heritage site.  The promotional code is “20ANNIV” and is valid for minimum of five-night stays between now and December 21, 2012.

Since its inception in 1992, Ladera Resort has become the top Caribbean hot spot for celebrities and honeymooners.  It has received numerous awards, including the prestigious “Best Hotel in the Caribbean”, “Best Hotel in the World” and was given the number spot on the “Best of the Best” list.

Its Dasheene Restaurant is one of the highlights of Ladera, offering some of the most refined dining and astounded views in the Caribbean.  Its elegant decor focuses on natural fabrics and woods to complement the birds-eye view of the island.  The menu features Chef de Cuisine Nigel Mitchell’s innovative interpretations of Saint Lucian and Caribbean specialties, based on local produce, and fresh fish.

During this 20th anniversary celebration, the St. Lucia resort will also unveil five additional connecting luxury one-bedroom Hilltop Dream suites on Paradise Ridge due to open in October 2012.  Other new Ladera Resort developments to mark their twenty years of achievements include, a new fitness room, equipped with state-of-the-art machines and Yoga classes.

The luxury Caribbean resort’s Ti Kai Posé Spa will offer new outdoor Couples Massages on Paradise Ridge, a completely private retreat area of the resort which overlooks the Caribbean Sea and Pitons.  The Ladera has definitely made some remarkable upgrades to its already top-of-the-line luxury accommodations.