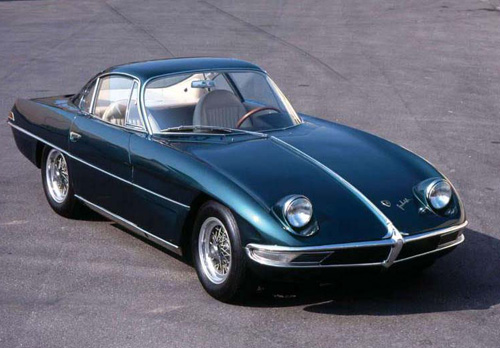 Another successful Pebble Beach Automotive Week just wrapped in California. For those in attendance at the Pebble Beach Concours d’Elegance car show got to see two iconic luxury cars from Lamborghini – their first-ever prototype car and their latest car model.

Automobili Lamborghini was first founded back in 1963 and headquartered in Sant’Agata Bolognese, Italy. At that location, the luxury car brand manufactures some of the world’s most sought-after super sports cars in the world.

Lamborghini is celebrating its 50th Anniversary in a big way at Pebble Beach Automotive Week. The luxury carmaker will be displaying a rare U.S. appearance of its 1963 350 GTV in addition to the new 2013 Veneno show car which is making its American debut.

The 1963 350 GTV luxury car is first-ever prototype from Lamborghini, so car show attendees had a special treat by being able to view it up close and personal.

Stephan Winkelmann, who is the President and CEO of Automobili Lamborghini S.p.A.was quoted, “Lamborghini’s presence at Pebble Beach will be the pinnacle of the brand’s 50th anniversary celebrations in North America. We’re celebrating 100 years of innovation in half the time – what better way than by showing the first Lamborghini ever built alongside our latest racing prototype and road-going super sports car – the Veneno.”

The ‘one-off’ 2013 Veneno show car offers 750-horsepower and sells for about $4 Million. It was first viewed at The Quail: A Motorsports Gathering on Friday night.

The Veneno then joined the 350 GTV, which first made its world debut at the Turin Motor Show in 1963, in an exclusive display at the Pebble Beach Concours d’Elegance car show on Sunday.

Friday night, Lamborghini hosted a display and exclusive executive retrospective presentation at Concorso Italiano. On Saturday, the general public also was able to see the two luxury cars during a Concorso Italiano-hosted parade that wound its way through downtown Monterey and historic Cannery Row.

Lamborghini continues to marked major milestones in the history of luxury super sports cars. In 2011 was the introduction of the best-in-class Aventador LP 700-4 and this year’s presentation of the SUV concept car Urus at the Beijing Auto Show,

Three lucky clients from around the world will begin receiving delivery of their Veneno production cars later this year.

If you are an avid luxury car lover and would like to make plans to attend one the luxury car shows from around the world, please contact The Life of Luxury and we can help arrange your trip.