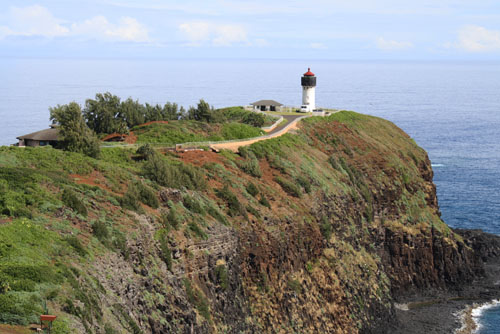 The impressive Kilauea Lighthouse on the north shore of Kauai, is actually also the northernmost point of the main Hawaiian Islands.

Located on the island of Kauai, the Kilauea lighthouse was built in 1913, and once had the largest lens of it’s kind. The lighthouse helped guide ships across the Pacific Ocean heading to and from the Orient.

The Kilauea lighthouse is now part of a national wildlife sanctuary. Either from the bluff overlook or the lighthouse itself, you will enjoy unforgettable views of the Pacific Ocean, passing whales and a variety of bird species.

Back in the 1970′s, the Kilauea Lighthouse light was finally shut off for the very last time. This iconic Kauai landmark was later replaced by a low-maintenance light beacon. The scenic lighthouse is located on a narrow peninsula and remains one of Kauai’s most popular attractions.

Although Kilauea Lighthouse is one of the most photographed landmarks on all of Kauai, relatively few people actually see it since you must drive through a residential area to reach it.

There is currently a process underway to restore the lighthouse to its original stoic condition.

Nearby is the Kilauea Point National Wildlife Refuge, home to a diverse population of nesting seabirds and the only such sanctuary in the islands.

Local lighthouse residents include the red-footed boobies, the Laysan albatross, and the great frigate bird with its mighty 8-foot wingspan.