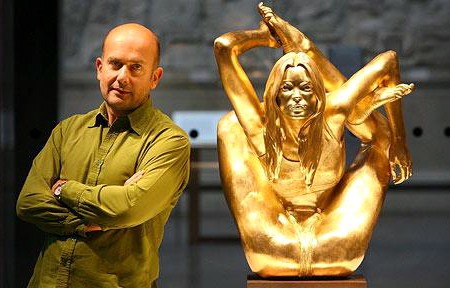 It seems that model Kate Moss appears to be a more than just a modern day fashion icon. Kate has made her way to goddess status.

Back in August, there was a public preview of a solid gold statue of Kate worth a shocking $2.7 million. The statue weighs quadruple what the rail thin super model weighs herself.

British artist Marc Quinn’s “Siren” will be on display at the Nereid Gallery of the British Museum surrounded by, whom else, but goddesses like Venus the goddess of Love.

Marc Quinn says the supermodel is very thrilled. The Kate Moss look-alike statue is said to be the world’s largest gold statue made since the days of Ancient Egypt. That in itself is amazing.

Since the artistic piece was unveiled at the British Museum in London, it has drawn huge crowds.

“When I showed Kate the statue, she told me she loved it,” Quinn says of the piece, entitled Siren. “She modeled for me for a day or so – but she didn’t pose for me like that.” Noting that Siren is about “trying to live up to impossible dreams or immortality,” something Moss apparently contends with on a daily basis, he says, “For Kate, she thinks it lifts her into a mythic level. I think she very much loved it because she appreciates the difference between her image and herself.”