Holy Grapes! A Bunch of Ruby Roman Grapes Sold for $5,400 in Japan 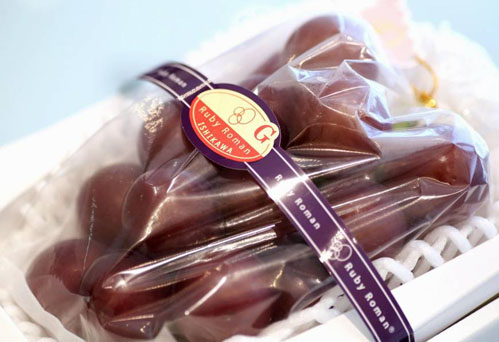 The saying goes that a marriage is the joining of two people – the union of two hearts. I don’t remember it including some pricey grapes. How about Ruby Roman grapes that cost a staggering $5,600!

That’s right. At a recent auction in Japan – according to The Japanese Times, a bunch of rare Ruby Roman Grapes sold for a whopping 550,000 Yen or about $5,400.

A wedding hall operator in , central Ishikawa, Japan – won the auction for the bunch that includes just 30 Ruby Roman grapes.

Ruby Roman grapes are actually the most expensive grapes you can buy. This winning auction bid now becomes the record high paid in Japan and likely a new world record. The prior Japanese record was set in 2009.

Some quick math calculated that each of the 30 grapes goes for $180. That’s each! At that price, listen to what your parents said while you were growing up – “chew slowly.”

A bridal couple will soon have the joy and privilege of tasting the Ruby Roman grapes during their wedding reception. Hopefully this marriage lasts many years!

These particular brand of rare grapes were created in Japan. The actual qualifications for Ruby Roman grapes are quite strict. For example, each grape must weigh a minimum of 20 grams. This particular bunch of grapes weighed around 800 grams so that’s almost 27 grams each! As a comparison, a golf ball weights about 46 grams.

If you are looking for the perfect wedding gift or want to have a fantasy dream wedding, please contact The Life of Luxury and let our concierge specialists help you.

Stay abreast of the latest luxury industry news such as this Ruby Roman grapes story, then routinely follow our luxury blog.