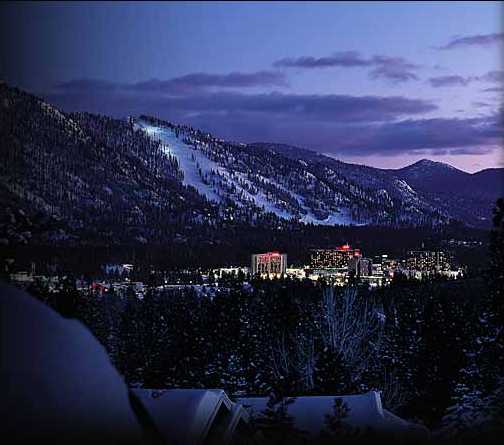 Although it’s only March at this mountain resort with the killer Lake Tahoe view, plans have already been established for May. Unless the exceedingly cooperative weather turns angry and decides to reverse course, skiers and snowboarders will be getting in their final runs until May 4 this year at Heavenly. In an unprecedented move, the South Lake Tahoe resort decided over two months out that it would extend its closing date, which rarely ventures into May and was originally supposed to shut down its massive, 31-lift system by April 20.

Of course, the reason for an extended season is the massive amount of snow Heavenly and all Northern California resorts have received this winter. Despite a slow start, the snow began arriving by mid-December, providing an early Christmas present. And it kept right on snowing through January and into early February.

Heavenly Mountain Resort received 167 inches of snow in January, marking the most snowfall in a single month since the resort began keeping data in 1975. The record snowfall has Heavenly’s snow pack 23 percent above average and heading into the second week of March the snowfall had exceeded 300 inches overall.

“We’re in one of those epic snow cycles that the Sierra mountain range is famous for,” said Blaise Carrig, Heavenly’s chief operating officer. “We beat the next closest month by 20 inches. There is no destination in the U.S. that has the kind of snow we have right now.”

Frankly, the Tahoe resorts were due for a wet winter. Two years ago was a down season and 2007 was characterized by warm temperatures and below-average snowfall. That combination led to a forgettable season in not only Tahoe but all of California where skier/snowboarder visits were down 1.6 million from the previous year (7.8 million).

For Heavenly season-pass holders like Justin St. Onge, it’s about time. The Marquette, Mich. native has been waiting for a season like this since he decided to call South Lake Tahoe his home six years ago.

“Yeah, definitely, it’s been a pretty good year, especially after the last two, which were horrible,” said Onge, 29. “We’ve had consistent snow all season.”
Russ Pecoraro, Heavenly’s director of communications, says extending the season two more weeks is a way to reward loyal pass-holders like Onge, who skis at least five days a week thanks in part to living only a few blocks away.

“It’s a chance to give people like our pass holders the value that they didn’t get last year,” Pecoraro said. “But it is important to know that it is weather dependent. If we don’t get more snow, we may not extend it.”

Like many Heavenly loyalists, Onge gravitates toward the tree runs, especially on powder days, which were frequent in January. One of Heavenly’s greatest drawing cards for expert boarders and skiers like Onge has always been its abundance of trees.

“Heavenly is so big and has so many tree areas that you can always find secret stashes (of snow) that no one knows about,” he said. “Even a couple weeks after a storm you can still find some stashes no one has skied.”

Good news for all Heavenly visitors this year has been the long awaited upgrade of the Olympic chair, which went from a dreadfully slow, old-fashioned two-seat wooden bench to a high-speed quad that cut the ride time from 18 minutes to around five.

“It was the type of lift that if you rode up with someone you had time to hear their entire life story,” laughs Pecoraro. “Olympic had been underutilized in the past, now a lot of people head over that way, so we got the desired result, people moving away from the Comet and Dipper lift.”

Not only does the Olympic lift now transport people up the hill in no time, they can easily access three new runs – The Pine, Cloud 9 and Bohemian Grove. Cloud 9 is a classic groomer run, The Pine is a mild tree run that is frequently groomed, while Bohemian Grove offers the type of tree skiing that makes Heavenly, well, Heavenly.

“It’s beautiful in that area, but it does get skied out in a hurry,” Onge said.