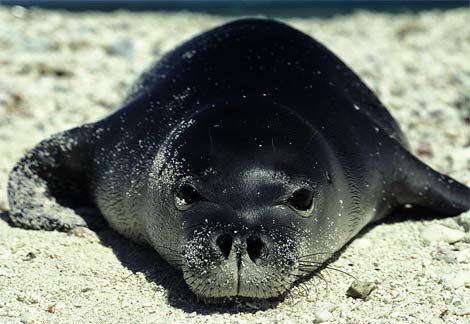 The Hawaiian Monk Seal is pure black at birth and then turns gray. Later it becomes tan and brown and then to green and red. It turns green because of the algae from being in the water for such a long period of time. The different colors that the monk seal turns depends on how long it stays in the sun and in the water. It’s normal color is a tan color. Adults are dark gray to brown and light gray to yellow underneath on his belly.

Click here to see a video of a Hawaiian Monk Seal

The Hawaiian Monk Seal has many types of food for its diet. Some of them are different types of fish, lobsters, octopus, reef fish, eels, and other marine animals.

Why is the Hawaiian Monk Seal Endangered?

The Hawaiian Monk Seal is endangered because of people and the Tiger shark. What we are doing to endanger the monk seal is Human Disturbance. Some of the human disturbances are pollution, taking all their food and getting trapped in fishing nets. Another reason is Tiger the sharks. After a Tiger shark attacks, the monk seal becomes a shark’s victim.

Another big reason why the Hawaiian Monk Seal is endangered is because of “Mobbing”. Mobbing starts when the female population started dropping and the males doubling. The males fight, even kill each other for the females. This mobbing is rather new to the Monk Seal.

We still do not know why this sudden physical violence has come over the males. The shortage of females affect the pups that are being born. If the pups are born many die quickly after at a young age from an unknown disease.