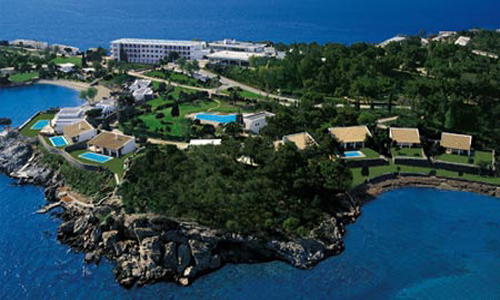 Total luxury overkill is the theme at Grand Resort Lagonissi in Greece, a sprawling seaside compound on a peninsula 30 miles south of Athens.

This is the kind of place where wealthy industrialists arrive via helicopter or Learjet, and Hollywood stars make discreet entrances in chartered limos. Long a favorite of the Mediterranean jet-set, Lagonissi is catching on worldwide — their Royal Suite made Forbes magazine’s list of the world’s most expensive hotel rooms (though presumably a portion of the $25,639 nightly rate goes to cover the wages of the suite’s pianist, chef, and personal trainer).

Slightly less ostentatious are the Villas, each with its own heated seafront pool, and even the most (relatively) humble standard room comes with a Jacuzzi tub in its oversized marble bathroom. The setting is stunning, both naturally and architecturally — the design is commendably understated and laid-back, enveloping you in comfort rather than bludgeoning you with opulence.

This is Greece, after all, and the natural surroundings speak for themselves. The living here is easy, the climate balmy and temperate, with the deep blue Aegean sea stretching out into the distance.

It is easy to understand, upon a moment’s leisurely reflection at the pool bar, or on a hired yacht, how it came to pass that the foundations of Western society were laid here — with nothing but sun and sea all around, there is plenty of time for leisurely contemplation and the invention of things like (for instance) geometry, or democracy.

It is significant, though perhaps not surprising, that Archimedes cried “Eureka!” not on horseback trudging across some Northern plain but in the Greek colonies of the Mediterranean — and in the (sadly pre-Jacuzzi) bathtub, no less. 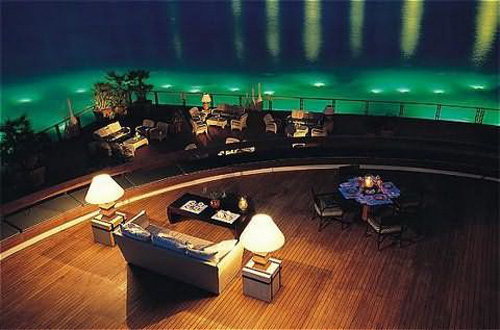