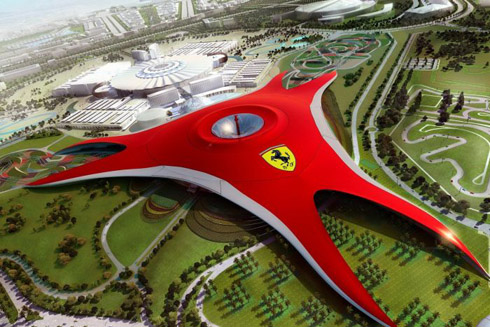 We reported last week about the grand opening of world’s largest Ferrari Store in Dubai. Also coming is the world’s first Ferrari theme park and largest attraction of its kind.

The theme park named, Ferrari World Abu Dhabi will feature an iconic sleek red roof, inspired by the classic double curve side profile of the Ferrari GT body. The roof will span over 2 million square feet and showcase the largest Ferrari logo ever created.

Ferrari World Abu Dhabi park is scheduled to open in 2010 but already has the racing car industry buzzing in anticipation.

There will be a number of attractions at Ferrari World Abu Dhabi, including multiple rides for children of all ages and the world’s fastest rollercoaster, which will travel at speeds exceeding 124 mph.

On tap is another exciting ride that will rocket passengers through the roof up to about 203 feet. This experience will simulate the G-forces that are experienced by Formula 1 car drivers.

The site for Ferrari World Abu Dhabi is located on Yas Island, which is on the North East side of Abu Dhabi’s mainland.

It’s just a short 10-minute drive from the Abu Dhabi International Airport and about 50 minutes from Yas Marina Circuit, which will host the inaugural Abu Dhabi GP later this year.