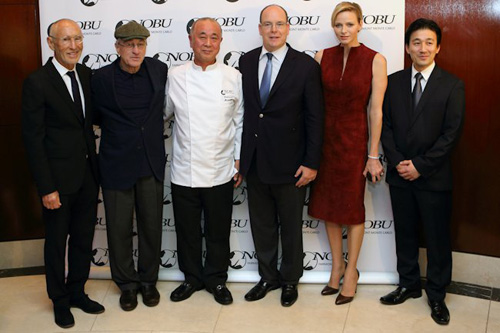 Nobu Restaurant opens in one of the most luxurious locations in the world – Monte Carlo.

The opening was a traditional Japanese Sake Ceremony, presented on a stage centered inside the restaurant in the luxury Fairmont Monte Carlo hotel. Also in attendance was the luxury hotel’s owner – Ian Livingstone.

Nobuyuki “Nobu” Matsuhisa is the highly acclaimed plus influential celebrity Chef, as well as the esteemed owner of Nobu restaurants.

The grand opening ceremony is also known as “Kagami-biraki. Performed to celebrate various events, it includes breaking open the lid of a sake barrel with a wooden mallet. Sake is then served to all the guests.

The kagami-biraki is followed next by handing out mochi, which are “soft round rice cakes” that are cut up in two pieces. The symbolism is to commemorate both the New Year as well as the beginning of a new departure in life or business.

This traditional custom is widely observed. It’s become a popular and growing method to launch a new company, wedding receptions,house-warming parties, plus other important celebrations.

Nobu restaurants offers the ultimate in fine dining and serves a mix of traditional Japanese dishes and South American spices and aromas.

For foodies you have always desired to eat at a Nobu Restaurant, please contact The Life of Luxury and we can assist coordinating a vacation or business trip.