Explore the Legend of Wai’anapanapa Caves 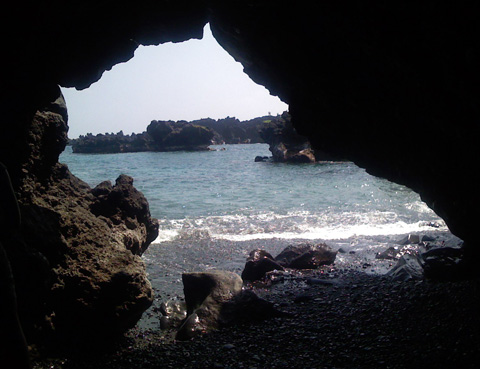 The Hana-Waianapanapa Trail follows a portion of the ancient “Kings Highway” from Pailoa Bay in Waianapanapa State Park to Kainalimu Bay in a shady heliotrope grove northwest of Hana Bay.

The word Wai’anapanapa translates into “glistening waters” in Hawaiian. But these warm waters once ran deep red when King Ka’akea brutally murdered his wife, Popu’alaea, in this cave where she was hiding from him. When he discovered her in the Waianapanapa Caves, he was filled with so much rage that he viciously killed Popualaea.

Every year during the spring, millions and millions of red shrimp reappear in the fresh water of this Maui cave. The legend says that the glistening waters of Wai’anapanapa turn red as testimony to that tragic ancient bloodshed that occured many years ago.

Directions:
The caves can be found off Highway 360E (Hana Highway). Just beyond mile maker #32, you will turn left onto the paved road. You’ll find Wai’anapanapa State Park at the end of this road. The cave is situated next to the black sand beach.