Excitement is Building for the “Cosmic X” Book by Jack Armstrong 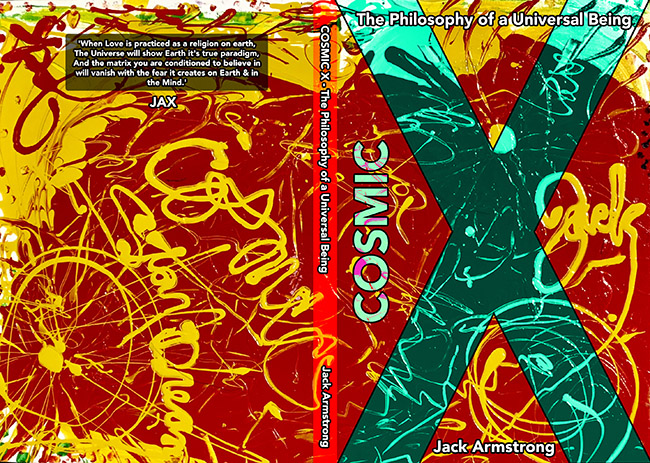 There is an exciting buzz in the air. The new book titled Cosmic X from artist Jack Armstrong is nearing its highly anticipated launch. Scheduled for January 2019, Cosmic X (bookcover photo above) will be a fascinating journey of the incredible life experiences and philosophic realization of the iconic artist – Jack Armstrong.

Jack has been painting since an early age and says, “All natural talent is inborn & appreciation is important, which gives you an innate sense of wonderment, which is something all children have. It is the greatest gift, if you can keep it alive as an adult.”

Early in his art career, Armstrong was a model in NYC. During this period, he became friends and collaborated with three legends of the art world – Andy Warhol, Jean-Michel Basquiat and Keith Haring.

Armstrong, who was named the “LAST WIZARD” by Warhol, says “It’s a cosmic experience when you are young, to be accepted by people like Elizabeth Taylor, & Andy Warhol, who were both so kind to me.”

“Andy loved what I did.” Armstrong continues, “He always told me, to follow no one.”

He said, “If you listen to somebody else, you’ll never discover yourself.”

The Life of Luxury is proud to have been provided exclusive access to some of the quotes to be included in the upcoming book – Cosmic X.  It’s like nothing else published in art or philosophy before.

Below are just a few quotes from the book, that will help to create a new universal paradigm in Cosmic X.  We hope you enjoy them and find the Armstrong collection inspirational, in multi-dimensional levels, of cosmic realization.

“History is a only a textbook, for what works & what doesn’t.”

“Fame or non-fame, have nothing to do, with the level of talent, or genius, in question.”

“Why have levels of fame become more important than levels of talent, genius, & love?”

“What we live for, becomes our enlightenment.”

“Each breath is enlightenment, centered in love.”

“We constantly tell people what we do & who we are, but not why, we exist, or how, we will exist in the future.”

“In a cosmic sense being trained from childhood, to seek the approval of others has kept the human species, unnaturally controlled, so we remain unfamiliar, with our natural abilities.”

“In Cosmic X, the creation of love, connects everything it touches, with the energy of the stars.”

“Creating light where there was darkness, In endless magic, that will come.”

“When you live cosmically, you become part of a natural universal code.”

“No one can stop our bliss, our love, our creation – we are code – replicating ourselves in the stars.”

“We are code running thru the universe, & retuning again in code.”

“Once you understand you are code, everything is possible.”

“How can you understand something that doesn’t exist, until you become the code.”

“The code is more infinite than the stars.”

“The code creates the stars.”

‘Cosmic X is Immortality in code.”

“Create zen with love, in cosmic ‘X’ as the world attempts to create order thru chaos.”

“Serve all, love all, become the code.”

“Discover oneness in yourself, & in the code.”

“You will become, everything you seek.”

In case you missed our recent article: World’s Most Expensive Car – $100 Million Armstrong-Bugatti-Cosmic X Planned for an Exhibit at the Galaxy Macau in China – here it is! Jack is already creating the ultimate, luxury hyper-car – the $100 million Armstrong-Bugatti. He says, “The most expensive car in history deserves to be a Bugatti.”

Last April, we were proud to feature the exclusive Armstrong: Cosmic Cowboy Boots  (photo below). They are the “world’s most expensive footwear.”

The Life of Luxury also collaborated on Jack’s Art Triptych collection. The three-piece art collection consists of all originals. If interested, you can acquire the Art Triptych, for a cool $45 million.

The “world’s most expensive motorcycle” (photo below) is titled the “Cosmic Starship Harley.” Also included are two seminal paintings: ‘Warhol Naked‘ & ‘The Cosmic Firebird‘ – both priced at $15M each.

The upcoming “Cosmic X” book will be available all around the world. As we get closer to the book launch, we’ll be sure to provide you with additional information.