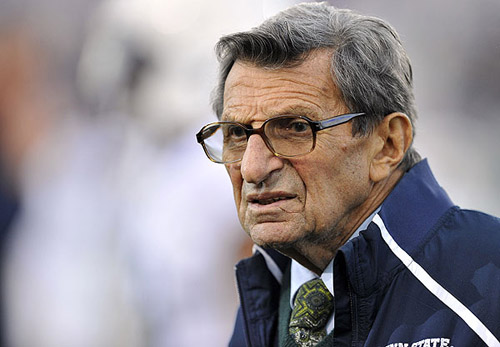 Iconic college football coach Joe Paterno died early Sunday morning at the age of 85 (1926 – 2012). Paterno passed away in the presence of his family and loved ones.

Joe Paterno died after complications due to his lung-cancer treatment at State College’s Mount Nittany Medical Center in Pennsylvania.

It was falsely reported yesterday through the news media that Paterno had died, but the rumor has denied. Sadly, the inevitable occurred just a day later.

Paterno’s family released a statement regarding his passing, “It is with great sadness that we announce that Joe Paterno passed away earlier today,” it said. “His loss leaves a void in our lives that will never be filled.”

“He died as he lived. He fought hard until the end, stayed positive, thought only of others and constantly reminded everyone of how blessed his life had been.

“His ambitions were far reaching, but he never believed he had to leave this Happy Valley to achieve them. He was a man devoted to his family, his university, his players and his community.”

Joe Paterno was the head coach at Penn State and guided the stellar football program for 46 seasons as the college team’s popular head coach.

Penn State was a college football powerhouse and one of the most respected programs ever. Paterno led the Penn State Nittany Lions to two national championship wins and an incredible 409 victories as head coach. Joe Paterno passed coach Eddie Robinson of Grambling (408 wins) to become the winningest coach in NCAA Division I history.

But with all the Paterno’s success on the college football field, his legacy ended in an unpopular scandal and was overshadowed by a child sex abuse scandal leading to his dismissal as Penn State’s head coach. The child sex abuse charges against former assistant Jerry Sandusky were a shock and rocked the sports world.

Paterno was diagnosed with lung cancer soon after Penn State’s Board of Trustees fired him on November 9.

Although his image has been tarnished, the legacy Joe Paterno leaves behind will survive the test of time. As we mourn the loss of one of the greatest coaches ever, his gridiron success with Penn State is what will matter in the long run.