Enjoy The Holidays at a Corinthia Hotels Property in Europe 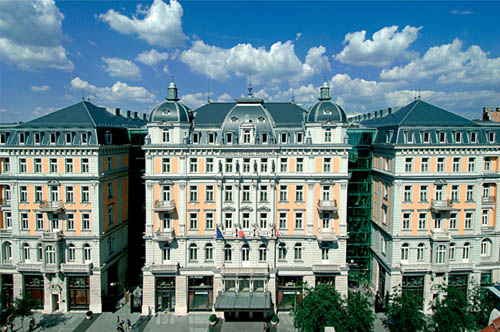 Corinthia Hotels offers a luxury collection of five-star properties located in some of the most beautiful European cities including: London, Prague, Lisbon, Budapest, St. Petersburg, plus the Mediterranean island of Malta.

If you are considering a luxury getaway to Europe, for the Christmas and New Year’s Eve holidays, a stay at one of the Corinthia Hotels should be your choice.

It doesn’t matter if you want to enjoy your holiday festivities from elaborate Christmas dinners to red carpet New Year’s Eve balls, or prefer to spend quiet time getting pampered in a spa and indulging in world class dining, the Corinthia Hotels are prepared to make this a “holiday to remember.”

Corinthia Hotel London – newly opened April 2011
Experience the festive season in unrivaled luxury and elegance at the recently opened Corinthia Hotel London.  The hotel boasts some of the largest rooms and suites in the very heart of London with Trafalgar Square on the north bank of the Thames, across from the London Eye.  Corinthia’s new flagship offers a variety of culinary delights, including contemporary modern British cuisine in The Northall and Mediterranean seafood in Massimo Restaurant and Oyster Bar.  Packages start at £299 per night (approx $467) for two including breakfast and dinner.

After a holiday of indulgence, embrace the New Year with a renewed dedication to wellbeing at the four-story ESPA Life at Corinthia, the largest hotel spa in London.   Starting at £195 (approx $300), a one-day detox will clarify and revitalize body and mind, melting away accumulated stress, leaving you fresh for the New Year.

Corinthia Hotel Budapest, Hungary
Capture the spirit of Christmas with a special two-night package at the Corinthia Hotel Budapest, the only hotel in Hungary included in TripAdvisor’s list of the top 25 hotels in Europe, which has been a city landmark for over a century.  Enjoy comfortable accommodation, traditional food with live entertainment and pampering at the Royal Spa, from €374 (approx $506) for two nights.

The Corinthia Hotel Budapest’s Royal Spa, which first opened in 1886, has been beautifully restored to the original splendor of the 19th century, while offering the latest state-of-the-art features of the 21st century, such as a 15 meter swimming pool, several relaxation areas, saunas, steam bath, Jacuzzis, a fitness room, multisensory shower, as well as a variety of therapeutic and massage treatments.

Ideally located in the heart of St. Petersburg on Nevsky Prospect, the 400-room Corinthia Hotel St Petersburg, following extensive refurbishment and restructuring work, now boasts more rooms and more facilities under one roof than any other luxury hotel in the city.

Standing on top of one of Prague’s seven hills, the Corinthia Hotel Prague offers stunning panoramic views of the colorful city from its top floor ballroom as well as from the indoor swimming pool.

The Award-winning Corinthia Hotel Lisbon is located in the heart of the financial district, a short distance from the historic city center, as well as the Lisbon International Airport.  The modern, stylish hotel offers stunning views of the 18th century Aqueduct and beautiful Monsanto Natural Park.

Set in the beautifully landscaped gardens of a 19th century restored villa the Corinthia Palace Hotel & Spa was the very first property in the Corinthia portfolio. Located across the street from the Presidential Palace and Botanical Gardens, it is in close proximity to the capital, Valetta, and the ancient walled city of Mdina

Corinthia Hotel St George’s Bay, Malta
Corinthia Hotel St George Bay offers a New Year’s countdown you will never forget in a Mediterranean atmosphere. Usher in the New Year at Corinthia, with its fun atmosphere and diverse entertainment starting at €532 (approx $720) based on two guests sharing for three nights. The New Year Eve’s package includes sumptuous buffet breakfast at Fra Martino restaurant, VIP treatment of truffles and liqueur in your room upon arrival, New Year’s Eve buffet dinner in the hotel’s main dining room with live entertainment, and free use of the facilities at the Apollo day Spa, which include the indoor pool, Jacuzzi, sauna and fitness studio.

Every room at the Corinthia Hotel St. George’s Bay has a terrace offering stunning views of the Mediterranean Sea and an architectural landscape that reflects the many cultural influences on this lovely, charming, Island.