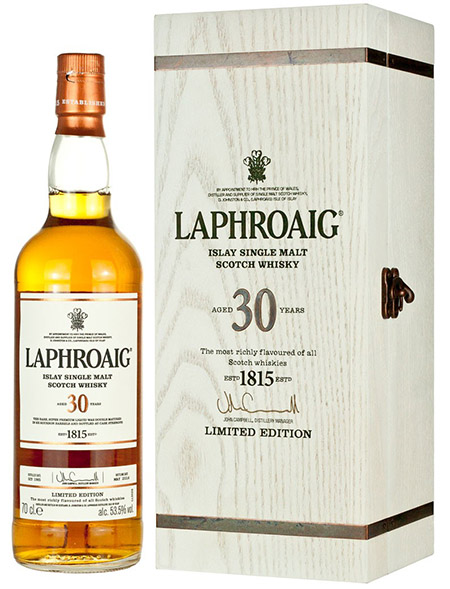 It’s hard to believe but the holidays are right around the corner. Are you ready? Of course not. There is so much to do. Take a moment to relax and reflect. Enjoy the holidays with delicious Laphroaig Single Malt Scotch Whisky.

Laphroaig is offering your choice of premium, holiday gift options. The top scotch whisky brand released two brand new, limited edition expressions. They are perfect for the holidays. Laphroaig 25 Year Old is a unique expression with creamy, sherried flavor that is perfect for scotch lovers in your life. In addition, the limited edition Laphroaig 30 Year Old brings to mind the seasonal flavors of almond and sage and is perfect for holiday dinners on a cold winter evening.

It’s important to remember the important things in life. The holiday season is a time to spend with the ones closest to us. Asa result, be sure to include Laphroaig’s subtly sweet Cairdeas Madeira in your holiday gathering. It’s barrel aged in ex-Madeira casks for the perfect, smooth taste. It is also the annual release of Laphroaig’s Cairdeas, which translates to “friendship” in Gaelic.

So be merry, drink and have a wnderful Christmas holiday season. We hope you get the chance to buy or try one of these awesome Laphroaig Single Malt Scotch Whisky choices.

Laphroaig 30 Year Old Single Malt Scotch Whisky ($1,000)
It’s a rare limited-release from Laphroaig Single Malt Scotch Whisky, and features notes of toasted almond, save and a subtle touch of the peat smoke that is Laphroaig’s trademark. Like the wave-washed granite walls at the Laphroaig distillery, Laphroaig 30 Year Old has acquired rounded character and exceptional smoothness through a double maturation in the first and second-fill ex-Bourbon barrels.
NOSE: Mandarin and mango rise to the forefront, tempered by toasted almond and coconut. Aromatic peat oils are interwoven, appearing as cedar, wintergreen and smoked sage. A drop of water releases flashes of honey and apricot
PALATE: A superbly oily mouthfeel with orange peel, vanilla and coriander leaf, in a cedar cigar box alongside wild root ginseng
FINISH: Long and complex with lingering pulpy stone fruit and chewy green hand rolled tobacco

Be sure to treasure the Christmas holidays with Laphroaig Single Malt Scotch Whisky. Perfect for any social occasion. Stop by again and read more spirit and fine liqueur articles in our luxury blog.