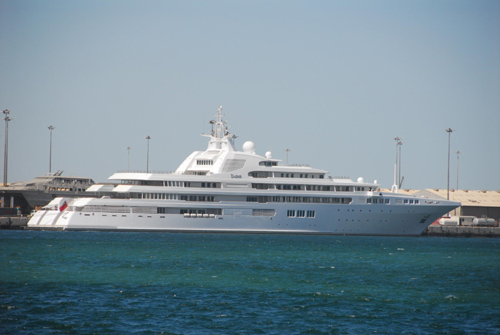 The Jacht was originally a lightweight Dutch naval vessel used to pursue pirates in shallow waters. When King Charles II chose to sail in one on his return to England in what would later be known as the English Restoration, the Jacht became a symbol of important and, eventually, wealth and luxury.

Today, that tradition is still quite alive and nothing demonstrates that fact better than the most expensive yacht in the world.

The most expensive yacht has gone by three names since its inception—Platinum 525, Golden Star and, most recently, Dubai. The Platinum 525 was commissioned by Prince Jefri Bolkiah of Brunei in 1996, but a lack of funds caused the project to be abandoned a scant couple of years later.

In 2001, Sheikh Mohammed bin Rashid Al Maktoum, then Crown Prince and now ruler of Dubai, took over the project and renamed it the Golden Star. Since its recent completion, it has reportedly been sold and rechristened once again.

Dubai, as it is now called, is as expansive as it is expensive. The 525 foot yacht features an owner’s suite, five VIP suites and a number of guest bedrooms. The bridge features the captain’s quarters, an office and a lounge. The foyer and atrium connects each deck while lighting them from above via skylight. The luxury yacht is powered by four diesel engines with over 9,000 horsepower altogether.

To purchase a luxury yacht, please contact us at: http://www.thelifeofluxury.com/luxury-boats-yachts-and-super-yachts/