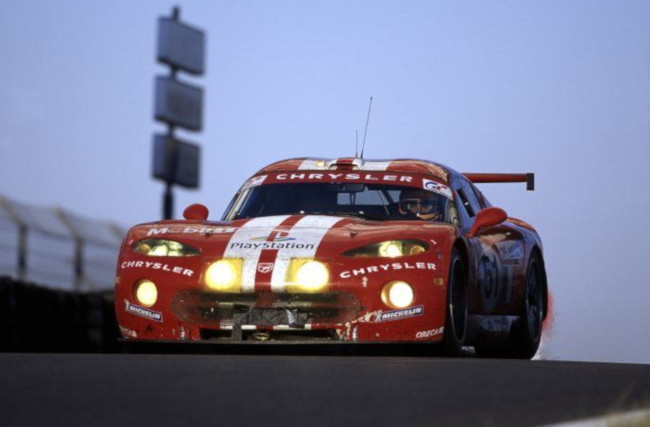 Today is Father’s Day. For all the great dads out there, cheers to you! Let’s celebrate this great day and talk about a great car. The 2000 Chrysler Viper GTS R. Maybe by the end of today, you may actually be driven to own it. It’s for sale!

After his 1959 Le Mans victory with an Aston Martin DBR1, Carroll Shelby stops racing. He learns that AC Cars in England are delivering their vehicles without a suitable engine and in the fall of ’61, convinces them that his modified Fairlane engines would do the trick. He calls the car the Shelby Cobra.

The legendary Shelby Cobra is born from a binding handshake between Shelby and Detroit’s rising star, Lee Iacocca. When the Cobra debuts in 1962 alongside Chevrolet’s new Corvette, it performs a lap at Riverside a near four seconds faster. Pete Brock finds this roadster to be the best platform on which to build a world-championship GT coupe.

For the years when super sports cars filled the grid, they ruled racing. The classic era of motorsports had returned to the stage nearly forty years from when Le Mans began.

At the 1989 Detroit Auto Show, a new concept car is unveiled. It is intended to gauge public interest. Surprisingly, the concept is resoundingly approved even before the car show ends. Lee Iacocca calls the car an American classic. Next, he tells the Bob Lutz fifty-person team, “Go build the damn thing”. This iconic car will be absurd and it will be built. This amazing car will be named the Chrysler Viper.

Working tirelessly, Dodge pulls the cover off the production car just three years after uncloaking the concept. The word is that six cylinders came from one V8 and four from another to form the Viper’s beating heart. What a great story!

Despite features such as external door handles and windows, the closed car remains as rambunctious as the roadster. Dodge, showcasing GTS’s handling ability, positions the closed coupe for sales in Europe. Around this time, Chrysler approves the development of a racing program centered around the GTS. 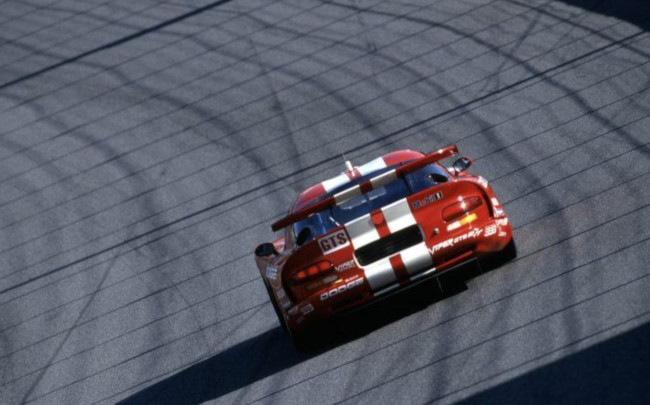 Ford’s 1966 victory over Ferrari, in many ways was an astonishing accomplishment. As a result, the GT40 was built like a prototype racecar and allowed a large displacement motor. This was due to Ford producing a large enough quantity of vehicles to count as a modified road car. Hence, this division paved the way for the GT40 while defining how the sport would later work in the 1990s with BPR Global GT and the FIA GT Championship.

To adapt the Chrysler Viper for both European and North American circuits, Chrysler realized that they required outside assistance. Next, Enter ORECA. They would re-construct the cars in France. This was after receiving a basic chassis and integral components from Roush. The famed bodywork is from British engineering firm Reynard Motorsport.

Now the year is 1996. It’s Canaska/Southwind that debuts the competition Chrysler Viper GTS R, for the North American IMSA GT class GTS-1, at the 24hrs of Daytona. Their car number 84 spins and suffers rear suspension failure in the infield. The leading car, car number 98, places 29th overall and a dismal 225 laps behind the winner.

But it is in 1998 that the Viper’s dominance becomes imminent. At the hands of Justin Bell, Luca Drudi and David Donohue, chassis C7 and the ORECA team take the GT2 class win at the 24hrs of Le Mans finishing 11th overall. This finish went down in history as the first GT class win for an American-made car since Shelby’s Daytona Coupe in 1964.

The Chrysler Viper’s dominance is strengthened as ORECA wins all but one event in the 10 race schedule. That feat clinches another GT2 championship later that year. ORECA repeats their formula in 1999, by taking another Le Mans class win and GT2 championship. That makes two GT2 Championship winning seasons and 24hrs of Le Mans class wins two years in a row but can the Viper make it a third?

By 2000, Chrysler’s home rival Chevrolet raises the stakes with the Corvette C5-R. For the 24hrs of Daytona, the battle between the Factory Dodge and Pratt & Miller’s Corvette Racing teams for GTO class honor came down to the race’s final hour on Sunday morning. Chassis 21, driven by Olivier Beretta with Karl Wendlinger and Dominique Dupuy alongside, would take the outright victory over the best Corvette C5-R with a final margin of just over half a minute. Viper triumphs as the first American production-based car to take Daytona.

Built-in February of 1999 and prepared for the 2000 season, we are introduced to the vehicle offered here, chassis GTSR C31. It is one of the final Chrysler Factory Works Team cars and differs significantly over customer cars thanks to specialized skunkworks components. Throughout its tenure, GTS R C31 (C31) ran as both numbers 51 and 91.

The 12 hour endurance race at Sebring on March 18 marked the team’s first pursuit. The result is a class victory for C31, and a 1-2-3 finish for Viper Team ORECA making for a fabulous photo finish in a display of utter dominance by the now legendary team.

The ACO’s 24hrs of Le Mans in June 2000 would fit here. Karl Wendlinger, Olivier Beretta, and Dominique Dupuy drive C31 (as car 51) to Viper Team ORECA’s third straight class victory. The 333-lap finish is Viper’s best Le Mans performance to date. Given the serious competition that the Pratt & Miller’ C5R posed, the win is one of the most significant as the pressures to overcome another American-Born racecar deepened the Viper-Corvette rivalry.

This incredible 2000 Chrysler Viper GTS R is available for purchase. If you are interested, please contact The Life of Luxury today. Buying this iconic car would make the perfect Father’s Day gift. Don’t you agree?

The Life of Luxury offers a wide variety of luxury concierge services. From VIP experiences like red carpet award to shows to finding you that perfect classic or vintage car. We have access to over 50,000 VIP events aoo around the world. Make your dreams dome true and star living a luxury lifestyle.

We hope you enjoyed reading about the 2000 Chrysler Viper GTS R. Return again and follow our popular luxury blog. Stay on top of the latest luxury car news.