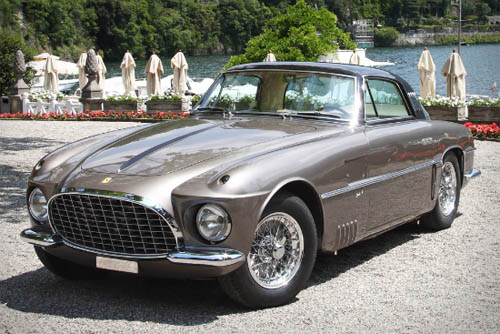 Bonhams was founded in 1793 and is one of the world’s largest auctioneers of fine art and antiques. Bonhams just announced an exciting new addition to the upcoming Quail Lodge motorcar auction in Carmel, California.

Designed by Giovanni Michelotti for Vignale and then sold new to the famed North American Ferrari importer Luigi Chinetti, the amazing 1953 Ferrari 250 Europa Coupé Vignale will be up for auction.

This incredible Ferrari was announced as one of the early car consignments at the Quail Lodge motorcar auction to be held in August.

This Ferrari was part of the luxury carmaker’s legendary 250 model range. It was also tailor made to showcase a wealth of exquisite design and styling details that put it in a class of its own. Impeccable and correct in every detail, the tobacco and bruno siena-colored Ferrari (its original livery colors) would be a welcome entrant and fierce competitor at any major concours d’elegance around the globe.

No doubt this beauty would become the crown of any luxury car collection. This show-stopping Ferrari will be offered along with many other cars of distinction at the 16th annual Bonhams Quail Lodge Auction during the world-famous Monterey Peninsula Car Week, in scenic Carmel, California.

To learn more about the 1953 Ferrari 250 Europa Coupé Vignale or make reservations to attend the Quail Lodge Motorcar Auction in Carmel, California, lease contact us using the below form: