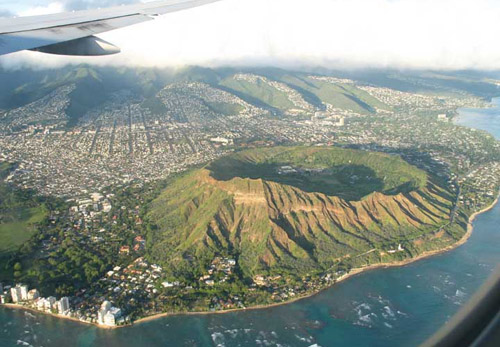 Diamond Head is one of the primary icons that Hawaii is known for. This majestic giant volcano towers above the Waikiki beach area and can be seen for miles.

Diamond Head’s visual prominence also benefits from Hawaii’s weather. The clear air and low clouds set off the shape the way a frame promotes a picture. “In Hawaii you see sharp, dense shadows and sparkling highlights on the landscape, and that helps define it as well.”

Government-owned, Diamond Head served over the years as a training ground and revetment for the military, rarely open to the public except during occasional music festivals. That has changed, and the two-hour hike to the 760-foot summit has become one of the most popular outings in the islands.

On the rim, visitors can also inspect the tunnels and sighting apertures dug out by the Army, when the peak was an important part of Fort DeRussy’s artillery system.

Diamond Head is a kind of logo for Hawaii, said artist Pegge Hopper. “The sheer shape of it is so iconic. A great crutch for beginning artists; if you had to ship out a label for anyone. Diamond Head, a hula girl, plumeria lei, a coconut tree — mix them together in any combination, and you have a logo that’s distinctly Hawaii.”

Diamond Head is also the name of a British heavy metal band and of a Charlton Heston movie, of a comic-book villain and of a tiny Southern hamlet. But the Hawaiian locals feel that Diamond Head is simply the best-known volcanic crater in the universe. Amen.