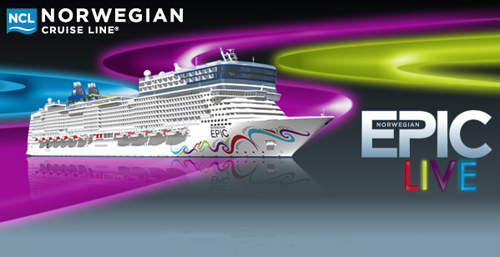 Norwegian Cruise Line recently announced that its largest and most innovative ship Norwegian Epic is sold out for its maiden voyage on June 24, 2010. The first cruise is a seven-day transatlantic sailing from Southampton, England to New York City.

Norwegian Cruise Line created a wait list for those interested in sailing on the transatlantic should any last-minute cancellations occur.

The Norwegian Epic will be the largest to berth in the Port of New York. The ship will arrive at Manhattan Cruise Terminal’s Pier 88 on Thursday, July 1. Country music legend Reba McEntire will christen the ship on Friday, July 2 followed by a two-day inaugural sailing.

On Sunday, July 4, Norwegian Epic will serve as the host venue for the 34th Annual Macy’s 4th of July Fireworks event. The event includes a national, one-hour, live entertainment broadcast on NBC-TV beginning at 9 p.m. ET and takes place on board Norwegian Epic where invited guests will have a front row view of the fireworks display.

“We are on the edge of our seats in anticipation of the debut of Norwegian Epic to the world in only a few short weeks,” said Kevin Sheehan, chief executive officer of Norwegian Cruise Line. “Guests on the transatlantic sailing will be among the first to experience all of Norwegian Epic’s innovative features including her more than 20 dining options and world-class entertainment.”

NCL released a sneak peak video of Norwegian Epic on its YouTube channel showcasing the finishing touches being made. The video is below and also viewable at www.ncl.com/youtube

For more information on Norwegian Epic and to book a cruise, call Norwegian at 888-NCL-CRUISE (625-2784), visit http://epic.ncl.com, or contact a travel professional.