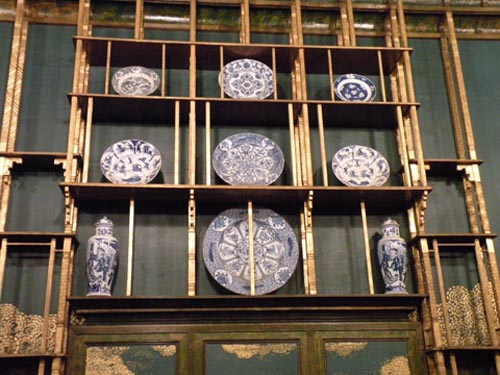 A small thematic exhibition will be on view at the Freer Gallery starting Aug. 7 until Aug. of 2011. The exhibit will explore the significance of Chinese export porcelain in Victorian England, where it began as an object of serious aesthetic inspiration but soon proliferated as a popular status symbol.

The exhibition features 23 works of art: eight wash drawings of Kangxi porcelain produced by the American expatriate James McNeill Whistler (1834 – 1903) for a collector’s catalog; related examples of blue and white from the Freer Gallery’s “The Peacock Room”; and several paintings, pastels and etchings by Whistler that reflect his interest in Chinese porcelain.

The blue-and-white porcelain collected by the Victorians was primarily manufactured in China during the late 17th century for a European market.

In 1863, Whistler purchased a number of pieces from shops in London, Amsterdam and Paris in an attempt to shed the influence of French realism and develop a more original style, one in which art, not life, was the inspiration.

If blue-and-white porcelain assisted Whistler in his transformation from realist to aesthete, it also marked a transition in English consumer culture, whereby middle-class shoppers sought to “express themselves” through their purchases.

Cultural commentators of the time both embraced and mocked the porcelain craze, which the cartoonist George Du Maurier dubbed “Chinamania.”

“Chinamania:” will offer visitors a deeper understanding of the cultural conditions that created a taste for Chinese porcelain and inspired “The Peacock Room.” The exhibition will be on view in the Freer’s ground-floor gallery.

To find additional information about the Freer and Sackler galleries and their exhibitions, programs and other events is available at www.asia.si.edu.