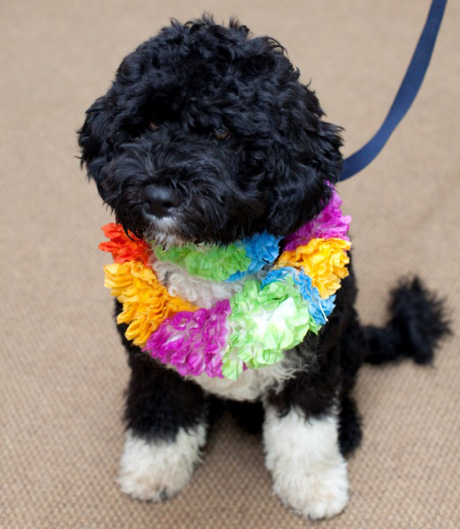 It’s official – the new First Dog, a Portuguese water dog, has arrived and his name is Bo.

After becoming President, Barack Obama and First Lady Michelle Obama promised their lovely daughters Sasha and Malia that they could get a puppy after they had settled into the White House.

The media has gone crazy with anticipation. What type of dog will the Obama’s choose? It seemed that everybody was offering advice and suggestions on the breed of first dog Barack Obama and his family should get.

President Obama initially expressed interest in selecting a “mutt” to serve as the nation’s first dog. The President also promised to adopt the First Dog.

It’s been documented that Obama initially made a promise to Dr. Jana Kohl, who is the author of “A Rare Breed of Love”. It’s a book focusing on a three-legged rescue dog and puppy mill survivor named Baby. Obama was so touched that he agreed to appear in Kohl’s book holding the dog. This capivating photo next became the cover for “American Dog” magazine in January.

Bo, the Portuguese Water Dog, is six months old and was returned to the original Texas kennel, where he was purchased by his previous owner.

Senator Ted Kennedy, who owns several Portuguese Water Dog, made the offer of the dog to the Obamas after he was returned.

The Obama daughters Malia and Sasha, love the dog and welcomed him with all their love.  The Washington Post stated, “Bo charmed the first family, a source who was there said. He sat when the girls sat, stood when the girls stood. He made no toileting errors and did not gnaw on the furniture. Bo has, after all, been receiving lessons in good behavior from the Kennedys’ dog trainers. These lessons have been taking place at a secret, undisclosed location outside Washington.”

The origination of the name “Bo” appears to come from Malia and Sasha. The first girls have a cousin who owns a cat named Bo. Another influence was the girls’ grandfather (First Lady Michelle’s father) was nicknamed Diddley after the great blues guitarist Bo Diddley.

Look out Lassie, Rin Tin Tin, Snoopy and the others …. there’s a new famous dog in town – and his name is Bo, the First Dog of the United States.