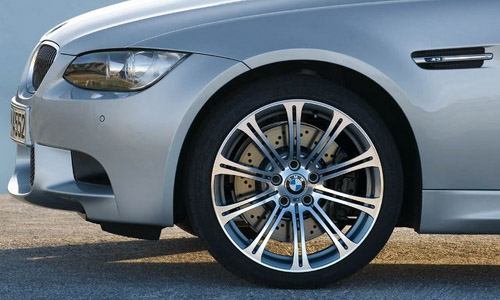 Without a doubt, it’s the M Series cars that make enthusiasts go ga-ga for BMW. Based on regular production series models, BMW’s M cars take performance to a new level, usually through a massaged engine, sport-tuned suspension, and other performance and cosmetic enhancements that turn something ordinary into something extraordinary.

The nose pushes gently. Feather the gas momentarily to get the bespoke Michelin Pilot Sport tires up front to bite, then back on the go pedal. Hard. The rear end starts to drift, but that’s okay — your backside feels hardwired into this thing, and you know within a quarter inch how far it’s going to step out. Sliding… sliding… There! The tail brushes past the cones on the outside of the track before the red coupe straightens up for the short chute into a tight right hairpin.

Mash the brakes. The track-spec pads — available over the parts counter at your friendly BMW dealer — grab the massive vented and cross-drilled rotors front and rear. There’s some momentary chatter from the ABS, but it stops like a cat on Velcro as you grab second gear. Then it’s off the brakes as I dive for the apex, getting on the gas early to bring the tail around. The stability control — in track mode — wags an electronic finger, but gets the car straight and aimed at the next turn in point with minimal loss of momentum.

It’s quick and precise; beautifully balanced and brilliantly responsive; deeply confident and inspiringly competent when you ask it the big questions. Yep, the new BMW M3 is everything the BMW faithful have been waiting for — and then some. But ironically, it’s the “then some” bit that might have a few of those faithful scratching their heads.

You see, at first acquaintance the new M3 appears to have — whisper it, now — gone soft. It feels remarkably refined as it loafs along the freeway in sixth gear, even with the optional 19-inch wheel/tire combo fitted to our tester. And although that screaming V-8 develops more than 100 horsepower per liter, it’s a pussycat around town, pulling cleanly from as little as 1500 rpm. The four-cylinder E30 that founded the M3 dynasty 22 years ago was as rowdy and rambunctious as a punk rocker in a ripped T-shirt; by comparison this fourth generation version is as smooth and suave as a banker in a Brioni suit and $1000 wingtips.