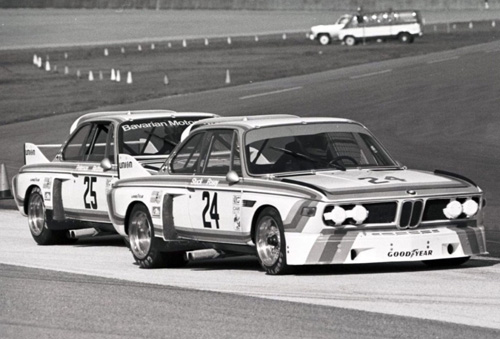 With the 2014 Amelia Island Concours d’Elegance nearing early next year, one of the featured experiences will be to view the BMW Batmobile racers.

The Amelia Island Concours d’Elegance is clearly one of the top automotive events in the world. Get a chance to view nearly 250 rare vehicles from car collections around the world. The event is held between March 7-9, 2014 at The Golf Club of Amelia Island, The Ritz-Carlton, Amelia Island.

The BMW Batmobile racers were first seen in the U.S. after arriving from Europe. They had giant wings, large fender boxes and huge spoilers. The Batmobile was powered by a beefy 430 hp straight-six engine that produced a stunning rumbling noise and allowed BMW’s luxury coupe to reach speeds of over 180 mph.

Road racing fans across the U.S. took one look at the cutting edge race car and simply fell in love. In addition, their admiration also provided the new BMW racing coupes their well known nickname today – “the Batmobiles”.

The first debut of the BMW Batmobile came at the 1973 Six Hours of the Nurburgring. It was a result of a corporate war between the be-winged BMW 3.0 CSLs and Ford’s Capri.

Ford invited Grand Prix stars Jackie Stewart and Emerson Fittipaldi, in addition to the Amelia’s 2014 honoree Jochen Mass. They led the blue-oval’s fight against BMW’s F1 stars Chris Amon, Hans Stuck and future World Formula 1 Champion Niki Lauda. But BMW won the most important race on the European Championship calendar that weekend. As a result the Batmobile legend was born.

Back in the summer of 1975, BMW entered a very special version of the 3.0 CSL “Batmobile” coupe at the 24 Hours of Le Mans. BMW’s first “Art Car” was created by Alexander Calder, an American artist known for his giant mobiles.

Alexander Calder’s 3.0 CSL was the first in a line of BMW Art Cars that spanned three decades. It set off a series of BMW’s racers rendered by famous artists. Frank Stella, Andy Warhol and Roy Lichtenstein interpretations of the 3.0 CSL followed Calder’s Le Mans “Batmobile”.

Known as a very charitable event, the Amelia Island Concours d’Elegance show’s Foundation has donated over $2.2 million to Community Hospice of Northeast Florida, Inc. and other charities on Florida’s First Coast since its inception in 1996.

Definitely a highlight and not to be missed, the Florida car event will host a special class for BMW’s rare “Batmobiles” at the 19th annual edition of the spring show that opens the international concours season.

If you would like to attend the the 2014 Amelia Island Concours d’Elegance car show and see a BMW Batmobile up close, please contact The Life of Luxury and we can assist you with all of your travel and car show arrangements.