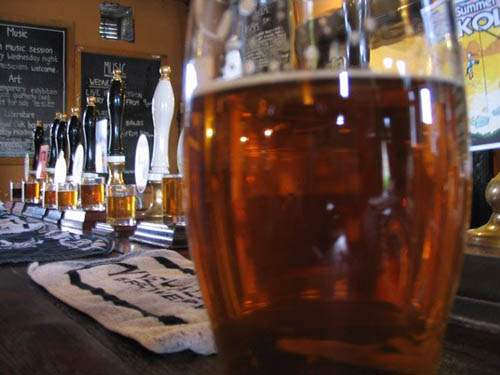 The National Brewery Centre recently opened in Burton upon Trent, Staffordshire – in the heart of England.

The National Brewery Centre is a world-class interactive museum and visitor center that showcases England’s proud brewing heritage and its strong influence on brewing techniques throughout the world.

The new brewery museum offers hundreds of exhibits and rare artifacts, in addition to a variety of multi-media presentations, the opportunity to see brewing first hand, and of course sample some beers.

To celebrate the opening, the official tourism body for England – VisitEngland, is honoring one of the country’s most important national treasures, the English Pub, by highlighting some of the most noteworthy.

The pub list includes those well known to be haunted, the smallest and oldest pub, as well as Michelin star properties, where the food is as much an attraction as the ale.

Pandora Inn near Truro, Cornwall is one of England’s most remote pubs. Being remote is one of the main allures Pandora Inn. Many patrons will arrive by boat, either by their own, or will take the Aquacab water-taxi ride from nearby Falmouth. Parts of the Inn date back to the 13th Century. The historic building still retains many of its original features including its flagstone floors, low-beamed ceilings and thatched roof. Pandora Inn features an extensive wine list and traditional real ales from St Austell Brewery.

Located in South East England, The Mermaid Inn in Rye, Sussex, is one of the country’s oldest and most enchanting inns. With Norman cellars dating from 1156, the Mermaid, rebuilt in 1420, offers tradition and charm in abundance. For many years the Mermaid has been frequented by artists from the stage and screen including Charlie Chaplin, Pierce Brosnan, Andy Garcia and Johnny Depp, along with Queen Elizabeth, the Queen Mother and Prince Edward, who have also visited. Additionally, painters from around the world have spent many hours capturing the rare character of the beautiful inn, which offers a wide range of accommodation including rooms with four-poster beds and fascinating secret passages. The lounge bar boasts one of the largest open log fires in England, while the restaurant offers tempting British and French cuisine using only the freshest of local ingredients.

Famed for being England’s smallest pub, The Nutshell in historic Bury St Edmunds, Suffolk, in the East of England, proudly holds the title of smallest pub in Britain as confirmed in the Guinness Book of Records. The quaint and cozy 17th century pub, comprising a bar that measures just 15ft by 7ft, has been serving customers jostling for a place at the bar since it first started serving beer in 1867. The Nutshell is now a major tourist attraction for local and international visitors, who visit as much for the interesting historical items, photos and memorabilia on display, as they do for some of the regions finest ales.

Claiming to be England’s Oldest inn, Ye Olde Trip to Jerusalem in Nottingham is also quite possibly one of the country’s most unique pubs, carved into rock and connected with the labyrinth of sandstone caves at the foot of Nottingham Castle. Several of the rambling rooms are burrowed into the sandstone rock below the castle, yet the Trip to Jerusalem is fully operational, serving a seasonal menu along with fine real ale and on occasion plays host to beer festivals and special events complimented with a range of guest ales from microbreweries throughout Britain. According to legend, Robin Hood is said to have shared his adventures at the pub over a pint of beer.

Situated next to the Royal Shakespeare Company in Stratford-upon-Avon, The Dirty Duck is world famous in Theater circles. A 15th Century building full of history, the very traditional pub is open plan with a separate restaurant, offering food from an extensive menu or Specials Board to be eaten anywhere in the pub. Well-known for its lively atmosphere, as well as its food and beverage offerings, there are often famous faces and ‘after show’ parties held for celebrities. A member of the Kennel Club of Great Britain, The Dirty Duck also welcomes dogs into its long bar.

Often referred to as a model for the perfect English Country Pub, The Star at Harome is a Michelin-Star restaurant and pub in North Yorkshire. Offering exceptional locally sourced food, a relaxed yet efficient approach to service, a place to stay and even somewhere for visitors to shop, The Star Inn offer guests a comforting, homely experience in one of England’s most beautiful rural settings. Despite being recognized as a Michelin-rated gastronomic oasis, The Star Inn retains all its village friendliness, along with its ancient timbers steeped in 600 years of hospitality.

Built to serve herring fishermen in the area, The Olde Ship at Seahouses on the Northumbria coast in the North East of England, features a nautical theme and boasts a rich collection of antique maritime artifacts. An ideal place to stay before or after booking a trip from the harbor to the Farne Islands, home to plentiful birdlife, The Olde Ship is a fully residential property. A highlight in the winter, the main saloon bar, has tremendous character and is lit by stained glass windows and the welcoming glow of an open fire. Perfect for alfresco drinking and dining during the warmer months, overlooking the harbor is a newly developed beer garden with unrivalled views of the surrounding boats and the Farne Islands.

The Philharmonic pub in Liverpool is a dazzling Art Nouveau pub where the Men’s lavatory is so magnificent that women are invited in to view its ornate, marble urinals and toilets, as part of a guided tour. The architectural gem, opened in 1898, was designed by Walter Thomas and stands opposite the Philharmonic Hall. Known by locals as ‘The Phil’, the Grade I listed building features an imposing exterior and highly decorative interior. The Philharmonic has dark wood-paneled walls, musical scenes depicted in copper and Art Deco lights that shine onto the mosaic covered floor and bar. The central, horseshoe-shaped bar is awash with intricate stained glass and is notable for its bunches of glass grapes and huge, golden eagle watching over drinkers. The least elaborate bar at the front of the pub contains a TV and glazed lamps in the windows, each resembling the Statue of Liberty’s torch.

Believed by many to be haunted, the Grenadier in London’s Mayfair, is an atmospheric old pub filled with character and military history. On one of the walls of the tiny pub, which has long enjoyed a reputation as one of the most haunted pubs in London, yellowed newspapers tell of the pubs haunted history, and a small crucifix hangs on a wall of the cellar to ward off harmful spirits. Unassumingly situated in a tucked away mews, the Grenadier has a decidedly country village air about it and despite its haunted reputation, it is one of London’s most enchanting pubs.