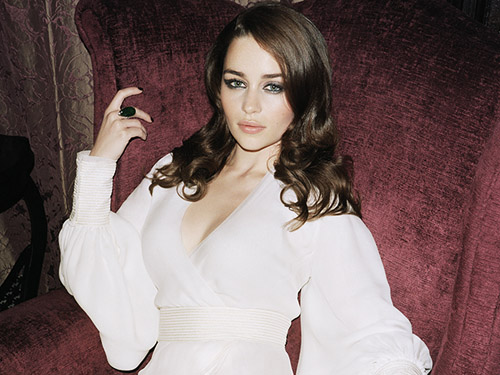 AskMen is proud to be the world’s No. 1 lifestyle Internet site for men and recently announced their popular “AskMen’s Top 99 Most Desirable Women of 2014.”

More than one million votes came in from around the world and the winner of the World’s Most Desirable Woman was …. Emilia Clarke from HBO’s “Game of Thrones.” (above photo from AskMen)

This year marks the 13th edition of the Top 99 Most Desirable Women reader poll by AskMen. Readers were asked to vote for women who most closely match their ideals and to consider additional criteria including talent, character and potential for 2014. The goal was to not just make it a vote solely on sex appeal.

For 2013, Oscar-winning actress Jennifer Lawrence was voted No. 1 but slipped to No. 4 this year. Alison Brie is from the “Community” TV series and music video model Emily Ratajkowski starred in last year’s hit song “Blurred Lines.” The beautiful Emma Watson from the blockbuster “Harry Potter” movie series was voted No.5.

James Bassil is the publisher of AskMen and was quoted, “The final Top 99 list is the product of both reader and staff votes, but if it were up to the staff alone I don’t think we’d be seeing Miley Cyrus on it. AskMen reader votes secured her a spot, but we remain skeptical about some of her recent behavior. We’ll see what 2014 brings. But at the moment, No. 99 seems to be the right spot for her.”

Women from TV shows were very popular again this year. In addition to Emilia Clarke, the popular HBO show “Game of Thrones” also landed two other actresses on the Top 99 list – Oona Chaplin at No. 43 and Rose Leslie at No. 61. Kat Dennings from “2 Broke Girls” came in at No. 12, Zooey Deschanel of “New Girl” was No. 17 and the sexy Sofia Vergara from the hit ABC show “Modern Family” appeared at No. 40.

There some surprises as several women you rankled high last year, slipped after the 2014 vote. Mila Kunis fell from No. 2 all the way down to No. 26. Rihanna dropped from No. 4 to No. 19 plus beautiful model Miranda Kerr declined to No. 46 after ranking No. 6 last year.

In addition, three women you were in last year’s Top 10, fell completely off the 2014 Top 99 List –
Kristen Stewart, Michelle Jenneke and Jessica Pare. Just proves that popularity can be just a fleeting

The Life of Luxury has arranged “Meet and Greets” with several famous celebrities. If interested in learning more, please contact us.