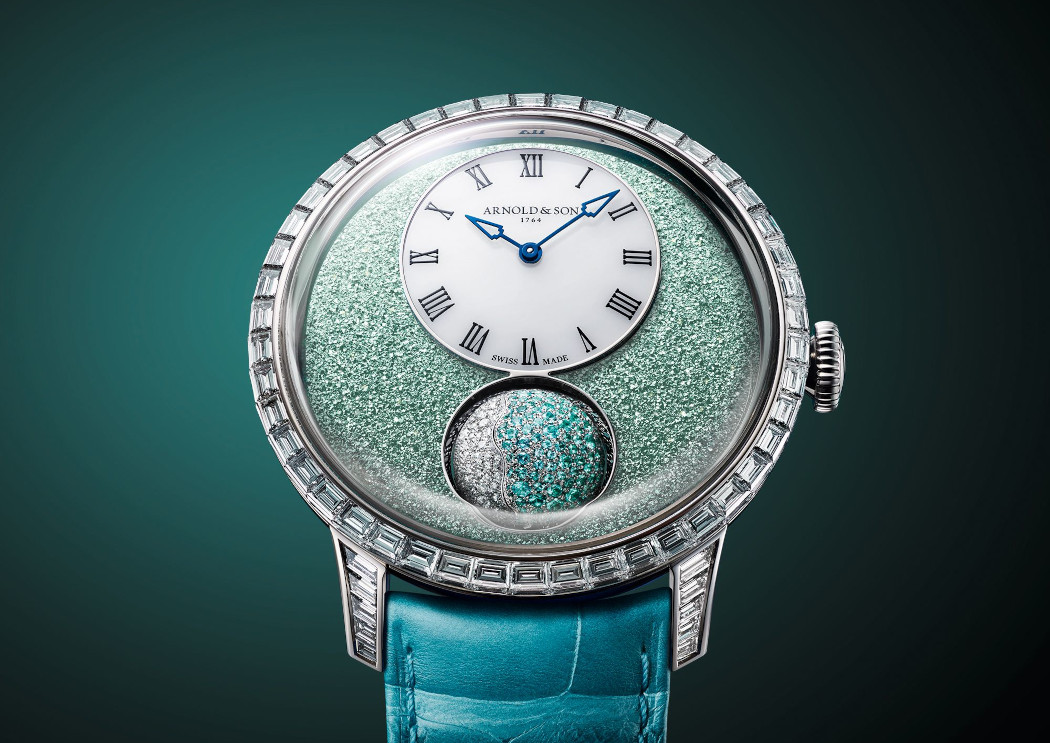 Arnold & Son is named after John Arnold, an English watchmaker of the 18th century. Hence, the legendary watchmaker company was recognized for his ingenuity and work on marine chronometers. Arnold & Son continues his legacy by exploring contemporary ways to interpret traditional watch craftsmanship. All its watches are designed and manufactured in La Chaux-de-Fonds, located in the cradle of the Swiss watchmaking industry

With this launch, Arnold & Son releases a new high-jewelry version of its beloved three-dimensional moon model. Above and beyond the technical prowess of including a 12 mm lunar sphere into a watch, the piece features superlative gem-setting. From pavé to invisible and channel setting, Arnold & Son draws on watchmaking savoir-faire of the highest level. Thus, the end result is the limited production of eight Luna Magna Ultimate II timepieces.

The Luna Magna Ultimate II is adorned with PVD-treated ruthenium crystals. The dial adopts the same shade as the Paraíba and is encircled by baguette-cut diamonds. As one of the rarest and most precious gemstones, the pavé-sets on the three-dimensional astronomical moon.

The 44 mm diameter case is crafted from 18K white gold and is studded with no fewer than 7.62 ct of exceptional-quality diamonds. Also, is the extraordinary color of the Paraíba tourmaline. It is a rare and much sought-after stone. Therefore, the finishing touch on this exotic and refined piece is the blue-green tones bordering on turquoise. 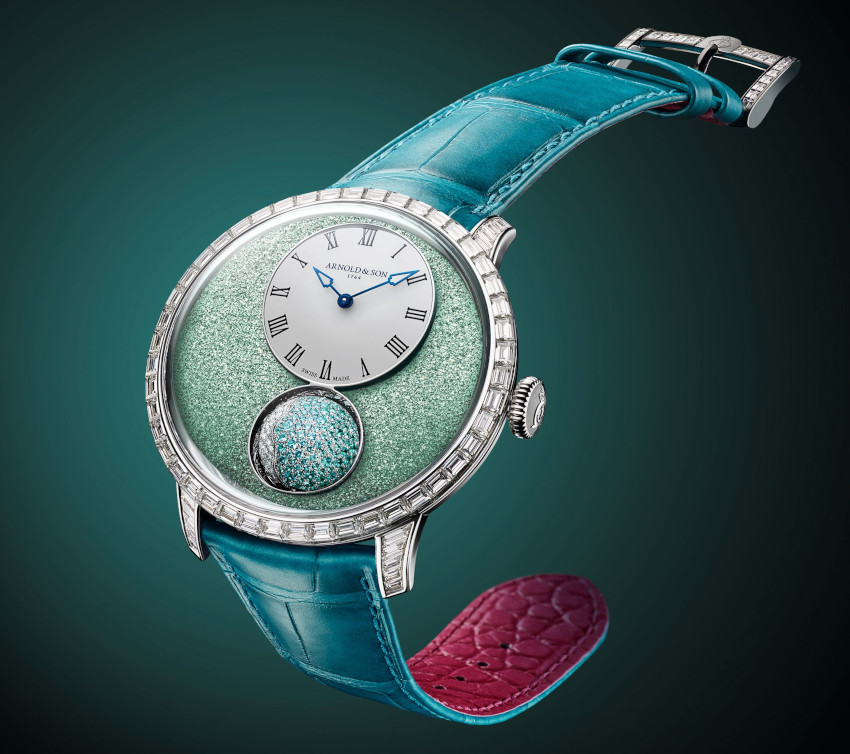 A fine ring surrounds the new Luna Magna Ultimate II watch. It is formed of 112 baguette-cut diamonds totaling 5.90 ct. They overhang the flat surface of the bezel, appearing as if simply placed upon it, floating over its edge. Thus, it allows light to pass through them like an open prism. This is known as an “invisible” setting, generating unique sparkle. Continuing, its glittering appearance is due to millions of pure ruthenium crystals.

The extremely hard metal is found in platinum mines. This is due to being present in the same ore. However, ruthenium is much rarer than platinum. Hence, for the Luna Magna Ultimate II, the ruthenium is reformed into crystals and dyed using complex processes. As a result, it is regularly found on Arnold & Son’s timepieces and is unique in the watchmaking world.

A traditional dial is located at 12 o’clock. It is marked with 12 signature Arnold & Son Roman numerals. For example, this off-center sub-dial owes its pristine, slight milky white hue to opal. Underneath the time display, Luna Magna’s three-dimensional moon takes on a new appearance. Therefore, the white gold globe is entirely pavé-set. It is split into 161 brilliant-cut diamonds. This represents the illuminated side of the moon. Lastly, it’s the same number of Paraíba tourmalines for the portion in shadow.

The Life of Luxury has access to all the major luxury watch brands from around the world.  We offer the best new and pre-owned luxury watches. Please contact us to assist with your next luxury timepiece purchase.

We hope you enjoy reading about the new Luna Magna Ultimate II luxury watch from Arnold & Son. Follow us to stay abreast of the latest luxury news and product releases.