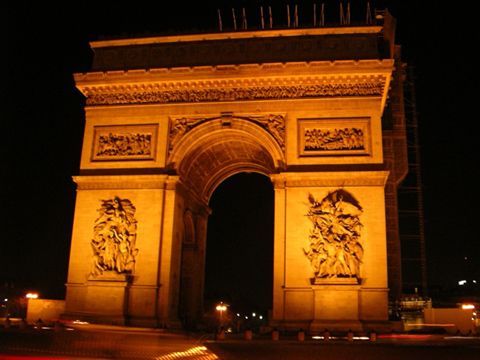 After you’ve done your last bit of shopping and reached the end of the Champs Elysees, the grand l’Arc de Triomphe (The Arch of Triumph) will greet you in a triumphant glow of yellow light . The first sight of this giant monument will be startling. Understandably so , since it is the largest arch in the world!

Of course, don’t be daft and try to brave the mad traffic surrounding the arch . Like spokes on a gigantic bicycle wheel, twelve streets feed into the motorway that circles the celebrated Arc de Triomphe. The most famous of these streets is the Champs Elysees, which extends all the way southeast to the Jardin des Tuileries on the north bank of the Seine.

If crossing the motorway around the Arc looks daunting, don’t worry, because there is actually a tunnel going under the street from the northeast corner of the Champs Elysees.

The arch and the place Charles-de-Gaulle which surrounds it, together form one of Paris’ most famous landmarks. Twelve avenues radiate from the arch which explains why it is also called place de l’Etoile (etoile=star).

The Arc de Triomphe was the brainchild of Napoleon Bonaparte. In 1806, as Parisians were examining ways to improve the five-way intersection at the start of the Champs Elysees, he decided to build a monument to his army and his own military genius. Today, it is a symbol of all things victorious in Paris.

Commissioned in 1806 by Napoleon I, shortly after his victory at Austerlitz, l’Arc de Triomphe was not finished until 1836. There are four huge relief sculptures at the bases of the four pillars. These commemorate The Triumph of 1810 (by Cortot), Resistance, Peace (both by Etex) and The Departure of the Volunteers, more commonly known as La Marseillaise (by Francois Rude). Engraved around the top of the Arch are the names of major victories won during the Revolutionary and Napoleonic periods. The names of less important victories, as well as those of 558 generals, are to found on the inside walls. Generals whose names are underlined died in action. Inside the Arch there is a small museum documenting its history and construction .

If it’s your first time in Paris, you gotta go to the top of Arc de Triomphe to enjoy the nice view of the streets spreading out in the shape of a star! Even though you might have been up high elsewhere in Paris, this is something different. It’s quite fun just to look down and follow the crazy traffic around the arc. By the way, you have to walk under the streets to get to the arc. It’s 8 euros to get upstairs but only 6.2 if you are a student or under 12 years old. Be ready to walk quite some stairs and before you reach the top, there is a historic museum and a souvenier-shop.

The Arc de Triomphe is one of France’s most recognizable symbols. Although you might sweat to get to the top, there is a small museum and gift shop. The best reason is for the amazing panoramic view of the city from, frankly, a better vantage point than the Eiffel Tower.

Le Tombeau du Soldat Inconnu (Tomb of the Unknown Soldier) lies beneath the Arc de Triomphe and contains the remains of an unknown French soldier. It is a monument dedicated to all the French soldiers who died during WWI. A permanent flame (Flamme du Souvenir) burns near the tomb.