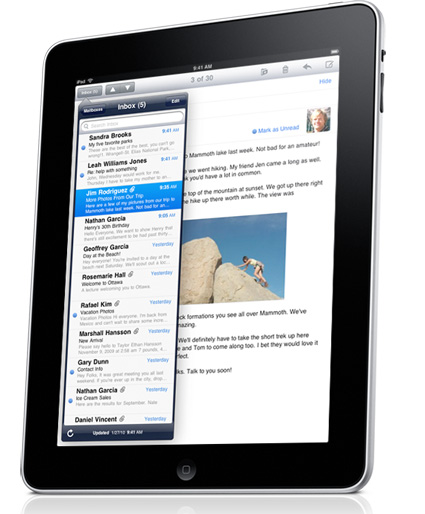 Apple has done it again, with another product launch – Apple iPad – surrounded by a lot of flair only Apple can do.

Apple recently announced the their tablet-style iPad. The price for Apple’s iPad will start at $499, which is actually far below what most industry analysts  thought – around $1,000.

The iPad is bigger and takes after the design of the popular iPhone.  Apple CEO Steve Jobs was quoted to say, “so much more intimate than a laptop and so much more capable than a smart phone.”

The iPad has both Bluetooth and Wi-Fi connectivity already built in. Apple reports that the iPad’s battery can last 10 hours or can remain in standby mode for a month without requiring a charge.

The Apple iPad will come with a 9.7-inch touch screen and is roughly a half-inch thick. The iPad includes either 16, 32 or 64 gigabytes of flash memory storage and weighs 1.5 pounds.

There was so much anticipation for the iPad that industry experts boldly predicted most of the product’s primary feature, such as its one-piece tablet computer with a big touch screen, it would be larger than an Apple iPhone but smaller than a laptop.

So will the iPad break from the pack? Tablet computers have been around for a decade now, but success has been allusive.

Users will be able to surf the Web with Apple’s own Safari browser, play games and watch videos Whether its sending email or flipping through photo albums, the iPad is technological marvel.

Apple is also launching a new electronic book store. The iPad comes with a book-reading interface that will the look and feel of a paper book. The Kindle by Amazon.com will be the primary competitor for the new iPad.

The iPad will come packaged with maps, a calendar, video player and iPod software for playing music. Similar to Apple’s iPhone and iPod, the iPad will be able to sync up with both Apple’s Macintosh and Microsoft’s Windows computers.