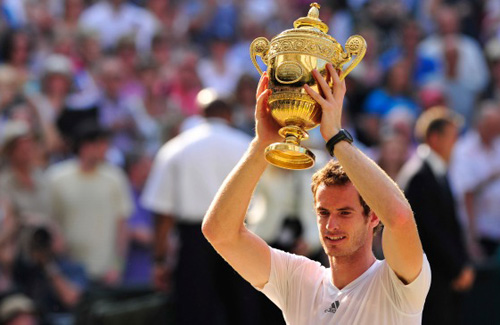 Murray was the local favorite as it seemed all of Britain was watching and hoping the long dry spell would finally be broken. Andy Murray had a formidable foe in Novak Djokovic, who himself was a six-time Grand Slam winner.

The celebs were also out in force, anxiously watching all around Wimbledon’s famous Centre Court. A few of the notable celebrities spotted enjoying tennis on the warm and sunny London day were Victoria Beckham, actors Gerard Butler and Bradley Cooper, soccer star Wayne Rooney, plus Prime Minister David Cameron.

The final game of the tennis match was a nail biter as much of the day’s action saw long rallies. After missing opportunities to win on three different match points, Andy Murray finally won battling through four deuces to beat Djokovic

Novak Djokovic did have chances. He led Murray 4-1 in the 2nd set as well as 4-2 in the 3rd set. Murray was the better player and broke Novak’s serve seven times to erase the two large deficits.